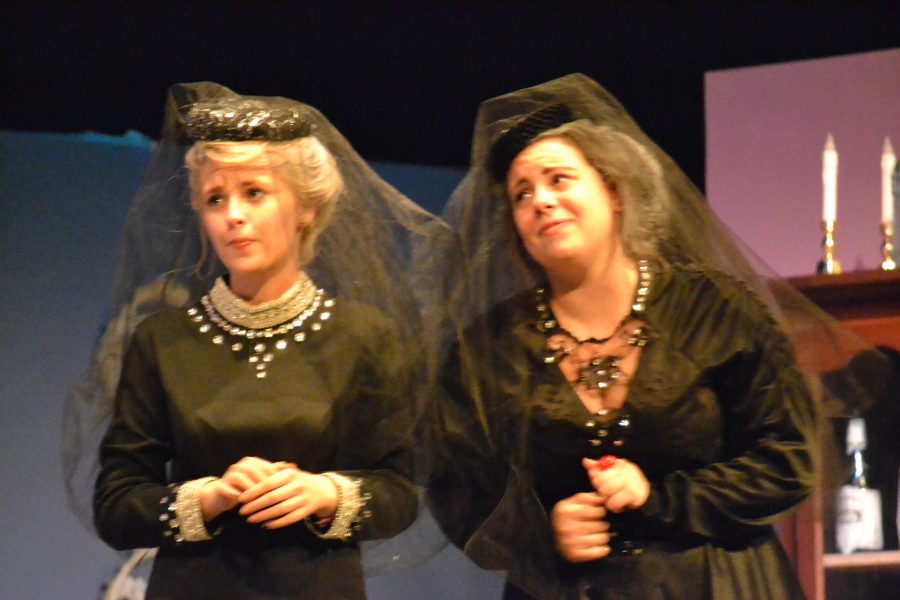 On Halloween weekend the theatre department performed the 1944 Broadway play Arsenic and Old Lace. The scene is set in 1940’s Brooklyn, New York, Mortimer Brewster brings home his fiancé to meet his seemingly normal aunts, Abby and Martha Brewster, only to discover that his aunts have an unusual method of comforting lonely bachelors involving poison and a one way ticket to the basement.
Bales cast senior Sammi Anderson in the role of Abby Brewster because of her remarkable acting skills and her phenomenal work ethic. Anderson describes Aunt Abby as the dominant, controlling leader of the murderous duo.
“She definitely likes to lead things,” Anderson said. “She’s more courageous when it comes to scary situations.” When trying to get into the character, Anderson thought a lot about the mannerisms of her grandmother. After memorizing her lines, Anderson understood the meaning and personality behind the character.
Sophomore Chloe Voss, who plays Abby’s sister Martha, describes her as a fun character to play.
“It’s great being an old lady,” Voss said. “That’s the one way I relate to her. It’s just a great character to play.”
Bales said that chemistry between Voss and Anderson seem as if they are real sisters.
“When you have to be a sister [to a] character, you can’t have a space between you two. You have to be near her and you do it together,” Voss said.
According to Bales, Voss is a dedicated actress who is committed to her role and to performing it precisely.
“When she read, I knew that she had studied and was dedicated. It was obvious that she was Aunt Martha,” Bales said.
In the iconic role of Mortimer senior Ben Sampson has his frantic moments of panic.
“I like the part where he gets mad,” Sampson said. “I don’t normally play those kinds of roles, so it was a nice change and a nice way to explore that side to my acting.”
Senior Dominique Herring, who plays Mortimer’s fiancé, has been active in the theatre department for all of her high school career.
“I wanted to keep trying until I got a main role,” Herring said. “I don’t have to alter myself a lot. She’s pretty normal, but she’s way more sexy.”
When choosing a play, Bales always takes into consideration that only a handful of his students will pursue acting in college and professionally.
“I want them to really get into the meat of the character, to get into the piece that the author wrote,” Bales said.
Sampson said that the cast works remarkably well together because of their close friendships and because of their previous musicals and plays.
“The play is so old, yet timeless, and I think that sets it out from other plays,” Sampson said. “Our chemistry is just really meshed together.”
~gretchen deitrich, staff reporter