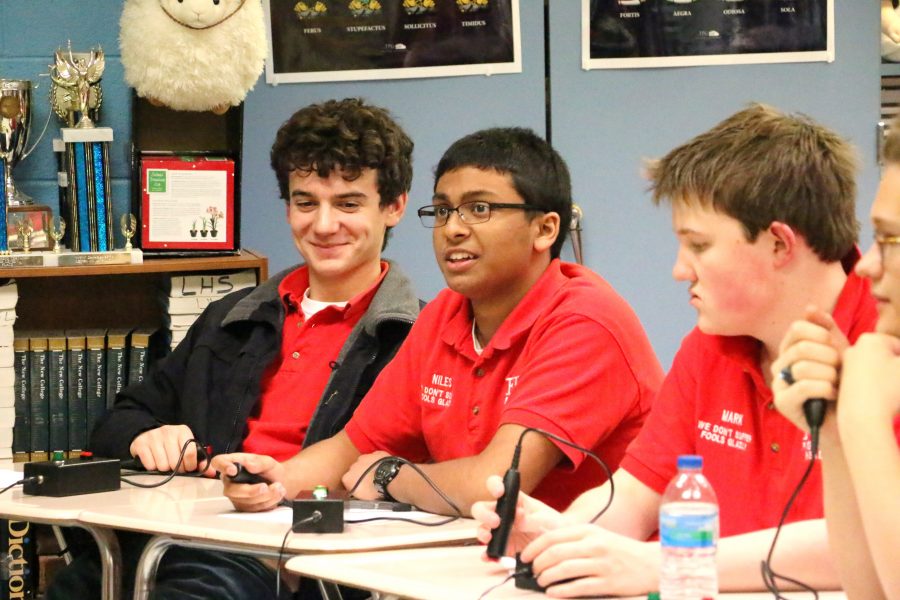 The undefeated Academic Team, also known as The Fighting Nerds, competed in 12 regular season matches and won at conference against five teams from the district and at regionals against nine other teams, only having to compete against four due to eliminations. After winning every match, they are going on to the states competition at William and Mary on Feb. 27.
“I think the progress this year has been amazing,” said history teacher Liz Monseur, who sponsors the team. “We have such a well-rounded team. My only issue this year is that four of our kids are graduating, so we have to recruit or we won’t have a team next year.”
Returning seniors Niles Ribeiro, Chris Parios and Mark Wiedenfeld share leadership roles and help to prepare the team for competition.
“Each of us on the team have our specialties, and so we’ll each be reading up more on our specific fields, as well as reviewing questions we’ve missed in the past,” Ribeiro said. “We’re going to be having more rigorous practices, too, and more practices per week.”
The competitions include questions on a wide range of topics, from literature, chemistry, biology, statistics and calculus, to foreign languages, current events, and even sports.
“Chris and Jeremy are masters of sports statistics,” Monseur said. “With most teams, and it’s funny, but when those questions come up, a lot of times there’s total silence.”
Each competition has two matches, and each match has three rounds. There’s a toss-up round with 15 questions where each team puts up four players, and any member can answer. In the directed round, the questions go back and forth between the two teams.
Junior Joel McGuire thinks the reason for the team’s success is due to the members’ diverse range of knowledge.
“We do all have our specialties,” McGuire said. “But we’re all sort of a jack-of-all-trades, master-of-some.”
Losing only one round during the regular season, the team has indeed been practically unstoppable. According to senior Angelle Martin, they generally won by a decisive amount of points. Some matches, however, were won by a narrow margin. Although correct answers count for 10 points, a team suffers a five point loss if they interrupt the question to give an incorrect answer.
“Culpeper and Manassas Park were very competent teams,” McGuire said. “They’ve been our most challenging competitors [during the regular season].”
Although Ribeiro, Parios, McGuire and Wiedenfeld are the starters, Monseur tries to play newer members. In addition to Martin, junior Jeremy Alexander, sophomore Shelby Bush, and freshman Joe Barrett comprise the rest of the team.
“I try to play everyone unless it’s a really tight match,” Monseur said. “The newer kids, they might know a lot of things, but they’re hesitant about buzzing in. It’s kind of something that you just develop confidence with experience.”
This year The Fighting Nerds faced new teams due to a change in districting.
“Definitely playing unfamiliar teams is higher tension,” Ribeiro said. “As with anything, you’re stepping into an unknown situation, but in some ways I think that forces us to play our best.”
The team’s undefeated record did not help them with brackets at conference because teams simply drew straws this year to see who would compete first.
“It was a little intimidating,” Monseur said. “You usually go in and have a by, but we went in and played right away.”
Regional brackets, however, were based on the teams’ performance.
“We were all paired up based on our seatings in our districts, depending on how many matches we’ve won or lost,” Ribeiro said. “It was kind of nice to have our win-loss record have an effect.”
This is only the second time that Academic Team has ever made it to the state competition, and the first time since Monseur has been sponsor of the team.
“Our kids were outstanding at regionals, and they’re really, really excited to go to states,” Monseur said. “At first we just wanted to make it to states, but now that we have, we really want to do well at states.”
The Fighting Nerds, who had already increased the frequency and depth of their practices, are ramping it up even more to place well at states.
“The margin by which we won and went to states was encouraging for our chances at states,” Parios said. “Actually winning is kind of a long shot, but if we could beat some teams there, I would be happy.”
Despite the team’s success, Monseur worries about the future of Academic Team. With half of the team graduating, including three of the four starters.
“We need academic junkies: Students who are well-read, or don’t mind doing the research,” Monseur said. “The thing is, not all of these kids come in knowing all of this stuff; there are resources where they can memorize and look up things.”
Members of the team agree that the main qualification is to be enthusiastic about learning and willing to expand one’s knowledge.
“Academic team is full of people who are very passionate about their subject areas,” Ribeiro said. “We love to learn new things. And so, if anyone relates to that, maybe they should look into joining next year.”
~jacqueline smith, co-features director