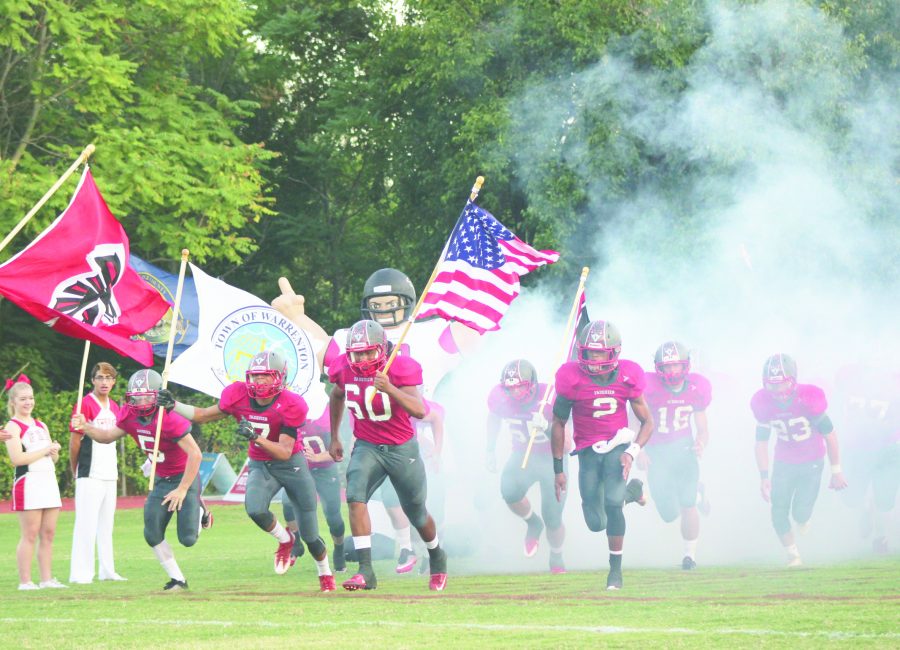 featured image by emma dixon
After beating John Handley, 46-21, on Sep. 9, the Falcon football team stands at 2-1 and moves closer to achieving their goal of making the playoffs.
Junior Dakari Mullins contributed to the Falcons offensive effort against the Judges.
“We need to stay positive and have a good attitude about every day,” Mullins said. “We need to play together as a team, listen to coaches, and do our best on and off the field.”
After finishing with a record of 5-5 last year, the Falcons look to improve early in the season. However, in his second year as head coach, Joe Prince knows there’s room to grow as a team. Prince is working to recruit players and coaches because the number of participants is low.
“We’re not as tough as I want, but we’re working on that and we [have] a good group of guys,” Prince said. “Last year, one of the things I learned was that our numbers were down, so we went out and tried to get more kids to play. It’s hard to get coaches in the building. It’s a process of trying to get everything to work together. We have to improve our facilities, improve our coaching abilities, and improve our kids by getting more out, bigger, faster, and stronger.”
On Sep. 2 the Falcons fell to Heritage after allowing the Pride to come back from a score of 12-0 at halftime to win 21-12, giving the Falcons their first loss of the season. The first game of the year concluded in a 42-12 victory over Loudoun County.
The Falcons will be running a balanced offense, with senior Ryan Crabtree at quarterback taking the snaps. The Falcons will be shifting quickly to outnumber the opponent, with a strong backfield and receiving corps to make up the play style. Along with the offense, the Falcons will play a 3-4 attacking defensive set while trying not to give up any cheap plays.
According to Prince, goals for this year are simple: make the postseason and have a winning record. Junior Cole Anderson describes the team as a family and credits the Falcons on working together to be successful.
“One of the big goals is to beat Liberty and Kettle Run,” Anderson said. “We can do that by working hard in practice and playing well as a team.”
The team’s motto, “68 and breezy,” reflects the goal of remaining calm and moving on to the next play. As the season progresses, the Falcons look forward to the obstacles they will face down.
“Football’s a journey and a lot of things happen week to week,” Prince said. “I want us at the end of the year to say we played hard every game, we overcame the obstacles we could, we won the ones we should’ve, and we won some we were not supposed to. I’d like for us to go as far as we can, and I’d like to see the kids enjoy themselves along the way.”
~ by alex wright, sports director