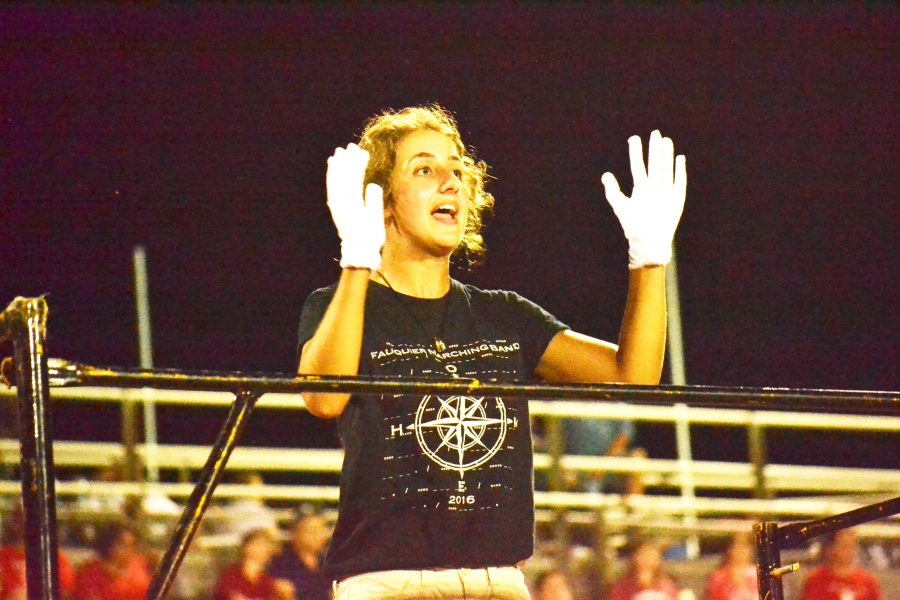 The marching band has adopted the theme of “Home” for their 2016 show, which depicts an outer-space adventure that follows the story of the homeward journey of a rocket ship. Band director Andrew Paul describes the show as an outer space adventure.
“We’re lost in space, far away from home, and [face] trials and tribulations along the way,” Paul said.
Senior drum major Hannah Savignac thinks this show is really fun for the audience to watch; she described the mood as very positive.
“[The first movement] is this rocket ship is going home, and something happens where a meteor hits it. All of a sudden, the rocket ship is broken,” Savignac said. “The second movement is the drum line trying to put the rocket ship back together and fixing it. The third movement is us finally going home. It’s kind of like an adventure movie.”
Senior Mason Hicks enjoys how challenging the show is.
“The show starts out very light-hearted, but then the big moment of the show hits, and it goes all dark and negative,” Hicks said. “In the end, it all turns out okay. The music is a lot harder and so is the drill.”
The band nearly doubled in size, with over 70 members, compared to about 40 students last year. Because of the increased size, the band moved up a class during competitions, but they are limited on uniforms. Their first performance was at the home football game on Aug. 26, and they did not wear uniforms because there were not enough for all members.
“It definitely takes a little more time to do stuff,” Savignac said. “But it’s also really interesting because, compared to last year, you can see a lot more people on the field, which is so cool. The field is almost filled up with kids.”
According to senior flutist Jasmine Brookins, the show features more visuals and is more complex than in previous years. She considers the number of new members to be net positive.
“It’s overwhelming a little bit, but at the same there are a lot of good freshman [who] are doing a really good job,” Brookins said. “[Having more people] adds to the beauty [of the show].”
Last year, the band was unable to travel to the national championships because of funding issues. This year, however, the band is returning to nationals, which will be held in East Rutherford, New Jersey, at MetLife Stadium, the official NFL stadium for the New York Giants and the New York Jets. Savignac’s goal is for the group to keep persevering and improving throughout the season.
“I’m hoping for improvement each week,” Savignac. “I hope we keep a positive attitude because the practices are long and the mood can get down. I expect a general, hardworking attitude from everyone.”
~emma dixon, copy production editor