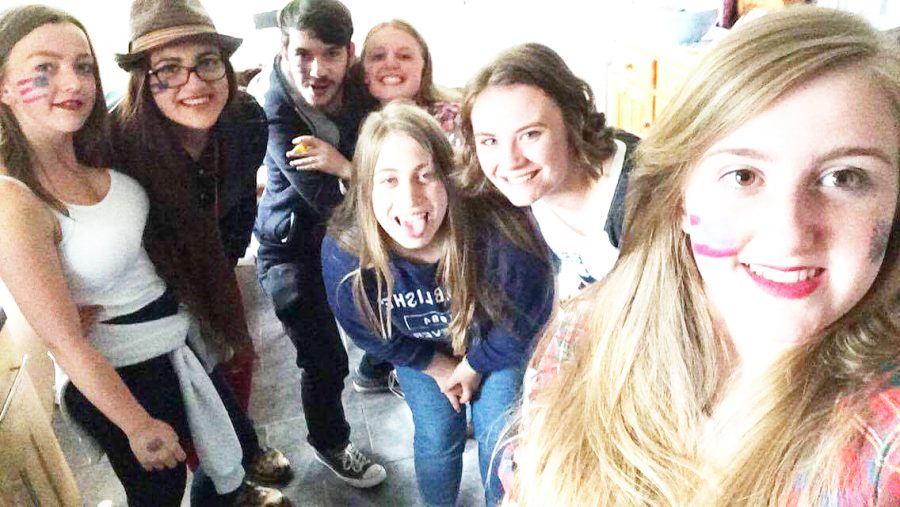 In June, seniors Elise Clonts, Emma Dixon, Alexandra Ferentinos and Javen Walsh travelled on a class trip with science teacher Jennifer Copperthite to London and Builth Wells, Wales, on a 16 day exchange trip.
The exchange program has been running since 1995, but Copperthite has been involved for seven years; this is her last year being the sponsor. The students spent their first two days in London and visited some of the famous attractions.
“We went to London with a personal guided tour, saw parts of Buckingham Palace, and the Royal Mews, which is a local horse-drawn carriage area,” Copperthite said. “We also got to go to the Tower of London and ate at a traditional pub.”
Ferentinos said that it was eye opening to explore the city and compare American cities to London.
“The city itself [is] a melting pot,” Ferentinos said. “Builth was just the old towns; it was nice and very different. [My host] said that their house is older than our entire country.”
After their stay in London the students took a coach to Builth Wells, Wales, where they spend the duration of the trip with their host families. Clonts had originally wanted to travel to Wales to experience a different way of life.
“I was lucky enough to stay with the same [student] who came over to my house, and we had an absolute blast,” Clonts said. “[My host family’s] mom travelled a whole lot, so I had a little bit of a different [family experience] from everyone else.”
The students had an opportunity to shadow their hosts during their classes and even participated in a field day. Clonts says that even though the Welsh schools don’t have a summer break, their regular breaks are longer than those of American schools.
“They still come in five days a week, and they’re able to leave for lunch, unlike us; things are a little more compact, so it works better for them,” Clonts said. “Teaching wise, it’s very much the same. They have smaller classes, but it’s also a smaller school.”
Welsh students can opt out of classes that don’t apply to their major, unlike the students here. This also means that students do not have to attend school every day.
“They have on and off days, like a college schedule; you can take [set curriculum] up to a certain point, and then you pick which [classes] will go with your major,” Ferentinos said. “It’s more oriented towards what your career will be, instead of taking them for no reason.”
Ferentinos and Walsh stayed with the same host family; Ferentinos said that she was surprised by how welcoming they were.
“I thought it would be way more awkward, but they were just normal people,” Ferentinos said. ”They were very humble and nice. I was very appreciative that they took us in; they were the nicest people ever.”
Going to Wales made Ferentinos more grounded and gave her a better grasp of how big the world is and what there is to see.
“We all have that ego [as Americans] that we know everything, but [when] you go somewhere else, you learn a lot,” Ferentinos said. “Everything is just so much older there, and it’s beautiful. You get to see a whole different culture; even though it’s not entirely different from America, it’s nice to see how people go about their lives. ”