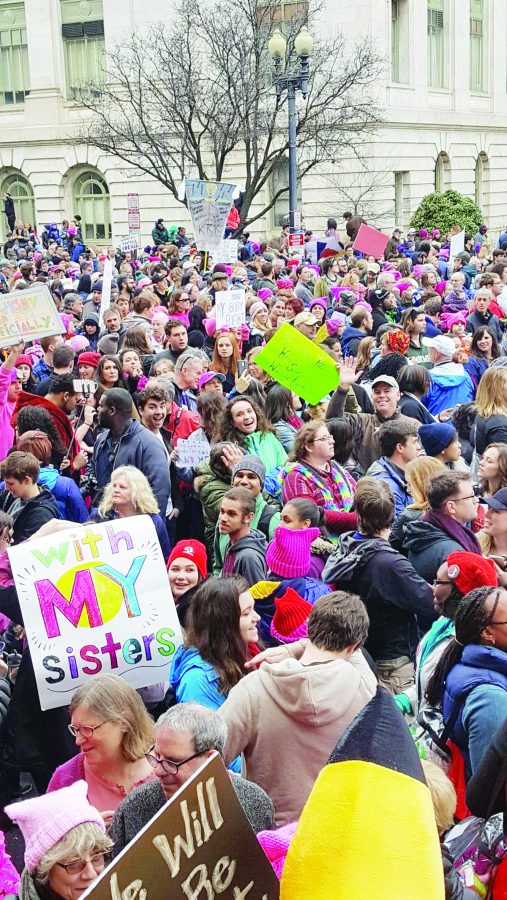 The day after Donald John Trump was sworn in as the 45th President of the United States, the Women’s March on Washington (WMOW) brought an estimated 1.7 million protesters to the nation’s capital on Jan. 21, for the biggest inaugural protest in American history. Co-chair of WMOW and social rights activist Tamika Mallory claimed the march was “not anti-Trump, but pro-women.” Over 15 FHS students and at least eight teachers attended.
“It was such an overall positive, empowering experience,” said senior Alex Amirato, who marched for equality for all Americans. “The rhetoric of this election season was not okay, and it made a lot of people feel like their opinion didn’t matter, but coming together with like-minded people was a really good, different feeling.”
The D.C. Metro system reported that this was the second busiest weekend in its history, trailing behind Obama’s 2009 inauguration. Thousands flew in, drove, and took buses from all parts of the country. Senior Madison Luellen got up at 3 a.m. to be at the metro station when it opened at 5 a.m.
“It was definitely overwhelming, but incredible. I participated in the Dakota Access Pipeline protest in D.C. last year, and I thought there was a lot of people then,” Luellen said. “It was nothing compared to the numbers [at the march] on Saturday.”
Luellen stayed in D.C into the night as people continued to march down Independence Avenue.
“Everyone is entitled to their own opinion, but I refuse to respect corrupt authority,” Luellen said. “I was there for all basic human rights, especially the importance of intersectional feminism, which supports women of color and ethnicities. This was a protest on a global level.”
There were large sister marches in downtown Los Angeles, Portland, Miami, and New York City, along with smaller marches across the country and the world, as far away as New Zealand and even on the coasts of Antarctica.
“It was amazing to see the enthusiasm and the hope that democracy in action can make a difference,” librarian Rebecca Isaac said. “Everyone, no matter what side you are on, deserves to be respected and loved. We had a peaceful march and a positive showing, and I have a deep sense of gratitude that in our country we have the privilege to do that.”
Junior Tatjana Shields advocated for the acceptance and celebration of diversity at the march and has been inspired to continue to take action in her community.
“At this march, I felt empowered like never before to stand up for what I believe in [and] for what is right,” Shields said. “Some focuses of mine were the recognition of Muslim rights; the Islamophobic reaction across the country because of someone’s religion kind of sickens me. I also believe in the Black Lives Matter movement; black Americans have been at the end of the totem pole for a very long time. It’s about strengthening the relations we have together.”
Freshman Macy Major went with her mother, English teacher Jennifer Major.
“I was really lucky to go with my mom,” Major said. “She’s very supportive, and I know not all parents are like that; it was very empowering to go with another woman in my life.”
The march was criticized in articles and social media posts from both men and women who strongly opposed the it and its platform. Junior Ben Nesbit attended the March for Life in D.C. the Friday following the women’s march and advocated for defunding Planned Parenthood.
“I think they need to get over it. The Democrats lost, and because they haven’t lost in a while, they’re just not used it,” Nesbit said. “I believe that every person has a right, and I marched for those who couldn’t speak for themselves. I feel like the women’s march kind of took that right away from people, which is sad. People are going to hate me for this, but they can hate me.”
Senior Max McDaniel-Neff, who attended the women’s march with his family and senior Aidan Kierans, viewed the march differently; he said that the protest was peaceful and everyone was supportive of each other.
“I was there to support Planned Parenthood, and that women still need to be respected,” McDaniel-Neff said. “The fact that Donald Trump even got elected shows that sexual assault is still a pretty big deal.”
Senior Victoria Rucka, who is an exchange student from the Czech Republic, was able to participate in the march and observe American politics up close and in action. Her country had its own women’s rights march in the capital city of Prague last year, but she said that it’s unlikely that her country would elect a female leader in the near future.
“I think [American politics] are going to get worse. A lot of things over here would never happen in my country,” Rucka said. “ I don’t think we’ll have a woman president [in Czech Republic] any time soon; a lot of people wouldn’t have a lot of respect for her simply because she is a woman, and most of the people in the government are men.”
Spanish teacher Karen Falcon had a unique perspective and reason for attending the women’s march with her oldest daughter. The Affordable Care Act, enacted during the Obama administration, helped Falcon’s family members obtain health care, a right that many people take for granted.
“I grew up overseas, and so I was always conscious of being an American and being patriotic,” Falcon said. “So for me, patriotism stands for democracy, freedom of expression, and diversity. To see the country pulling away from those things makes me worried. I think those things are our biggest strength. It’s important for people internationally to see that Americans can argue about opinions, yet still maintain a strong democracy.”
~julia sexton, news director