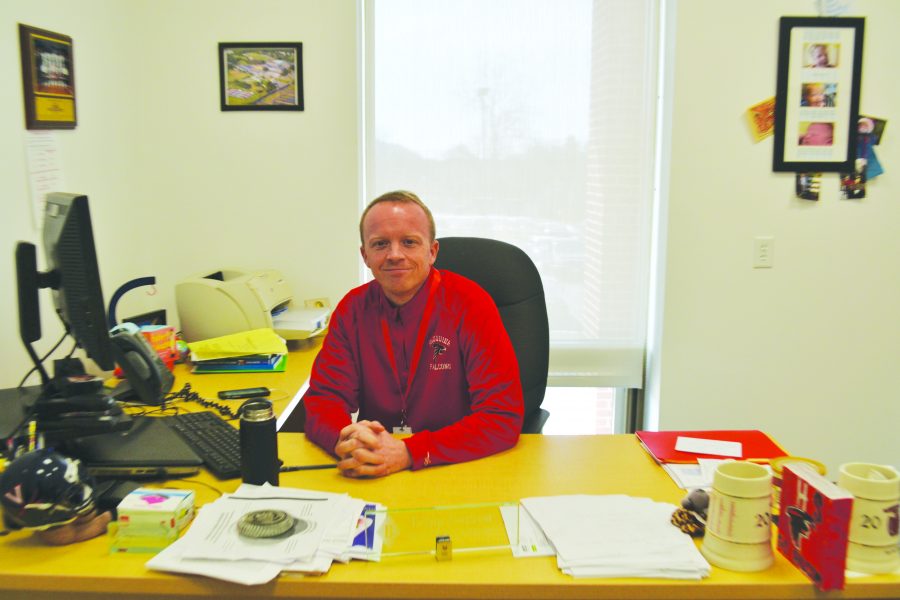 After a full day of attending meetings, observing classrooms, and having conversations with students, Principal Clarence Burton is usually found running his four children to their various after-school activities or making a quick stop at Wal-Mart before going home. In fact, the well-being of his children drives his decisions as an educator. He evaluates every aspect of the school’s programs against the gold-standard of whether he would want his own child to be in that educational environment.
When he attended James Madison University, Burton majored in political science and secondary education; he even managed the JMU basketball team. After graduating college, he taught government, world history and U.S. history at his old high school, North Stafford High School, then at Douglass Alternative School in Loudoun County. After attending George Mason University for an educational leadership program he became an eighth grade dean at Simpson Middle School to gain some administrative experience before moving to Fauquier County to become an assistant principal at Kettle Run.
Burton says that he enjoys teaching government because he misses student interaction and thinks that current events make the class more engaged. He loves seeing students become passionate about taking certain points of views.
“I like seeing kids develop arguments without becoming disagreeable,” Burton said. “We’re all affected by government everyday, and it changes all the time.”
Burton says he likes both politics and sports because they correlate. There is always a scoreboard and a bigger goal than working for oneself.
“A lot of the time you have winners and losers, and in the end it doesn’t really matter,” Burton said. “They’re competitions; people try to do the best they can, and sometimes you learn more from when you lose than when you win.”
After becoming the principal in 2013, Burton spent his first year trying to get a feel for the school and its environment. He says that he’s still learning everyday and just hopes to make a difference in the students’ lives.
“This was a preexisting school, and I had to learn what the Romans do in Rome,” Burton said. “When you go into a new school, you have to be mindful of the traditions that are there and really immerse yourself in that. The majority of the staff was here before I was, so I had to learn their strengths and hear what they want; I had to develop trust from them through performance.”
His main goal for his students is to keep them safe and to hire quality teachers who will make an impression on the student body.
“Our staff feel so strongly about this place,” Burton said. “They could work at other places, but they choose to work here. I’m honored to be a part of that.”
One of his favorite aspects of being principal is experiencing the tradition and history that this school has within the community.
“People care about this school,” Burton said. “Our athletics booster club has many members that don’t have children in this school, haven’t in years, but they want to give back. That’s a responsibility, on one hand, because you mean so much to so many people, but it’s also very unique because you don’t find that everywhere.”
Although he can’t pinpoint only one favorite moment, Burton says that graduations are always a powerful part of the year because he loves seeing the joy of the students and parents.
“I’m really looking forward to this year’s graduation because it is the first class I’ve been with all years,” Burton said. “I was here when they were freshmen, and they had to suffer through my mistakes and continued learning curve.”
In the years to come, Burton hopes the school will offer more real life experiences to students to broaden their horizons before college.
“I think we’re going to have more internships; I see that exploding in the next five to 10 years,” Burton said. “[I see students] learning what they like, and more importantly, what they don’t like. I think the days of sitting at a desk and spitting facts back to a teacher are leaving us fast, but the days of using that information is where we’re headed.”
Seeing students succeed is Burton’s favorite part of being principal. Whether it’s as simple as getting a problem right in class or winning the state championship, he loves how much the students care about each other.
“The main part of the job is the students; you always learn things from them, the energy, the hope, the change. It’s not about the leader, it’s about the whole organization,” Burton said. “My philosophy of my classrooms is: ‘If it’s not good enough for my children, it’s not good enough for anyone’s child.’”
~erica gudino, editor-in-chief