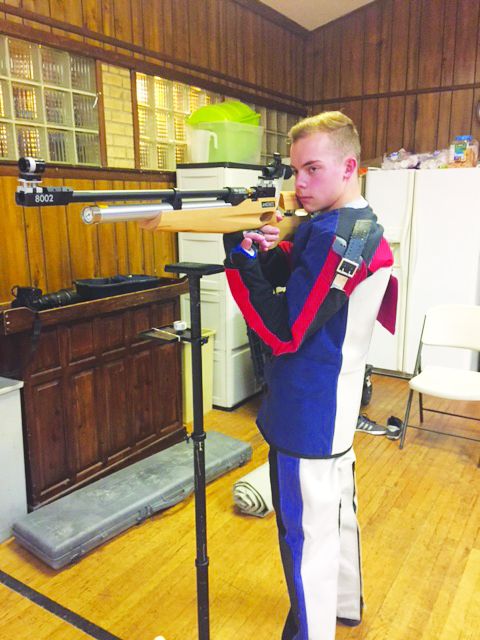 After beginning to shoot competitively around age 11, senior Sean Hardy fell in love with the unique sport. He has shot for several competitive teams and received many awards, and he is now a distinguished expert in rifle for the National Rifle Association and the Civilian Marksmanship Program, among the highest titles in competitive shooting. Nationally, he is ranked in the top 15 percent with the American Legion and in the top three percent of the U.S. Army Marksmanship under-18 division. Hardy recently received an invitation to train and compete in the National Junior Olympic Shooting Championships that will be held in Colorado Springs, Colorado, from April 7-13.
“I’m very lucky. The people that I shoot for raised enough money to get me out there,” Hardy said. “I don’t think I’ll really get excited until I’m actually there. I’m looking forward to seeing shooters from different parts of the country and being able to shoot in the facility. For the entire month of March, I’ll be shooting three to five times a week. My scores are good, but I’d like to show up and not look like a screw up.”
While in Colorado Springs, Hardy will train in the U.S. Olympic Shooting Center.
“I will be training alongside other shooters who qualified, which means that we are all in the pool that the Olympic team pulls from,” Hardy said. “[The event] is a mixture of training and matches to apply new techniques.”
Hardy qualified for the National Junior Olympic Shooting Championships when he shot a 564 out of 600 possible points at the Izaak Walton League of America (IWL) match in Centerville.
“I was very nervous about my score, and I wasn’t really happy with it. This event was 60 shots standing, which is the least stable and most difficult position. It was also only the second time I’d ever shot this type of match,” Hardy said. “Normally, I do three position—prone, standing, and kneeling—where I’ve shot scores of 583 out of 600, and 294 out of 300 as a split.”
The procedures and rules for competitive shooting require Hardy to use a special modified rifle to shoot at very small targets from different distances and positions. He must wear a special suit and use special gear to support him and improve his accuracy as he remains in each position for 20 to 25 minutes.
“I do three-position air rifle, so I take 60 shots, which is 20 from each position: standing, kneeling, and prone. Then, there’s a time limit for each of them, so I’m competing against the people next to me,” Hardy said.”Right now, I’m shooting for two teams.”
Finding teams to shoot with can be challenging since the sport is not as widely available as other high school sports. Since FHS does not have a team, Hardy joined a team in Centreville for a chance to compete. He also shoots with the local American Legion, where he practices three to five times a week.
“The original team I shot with is American Legion Post 72. Those are the guys that come by on the motorcycles to pick up the cards every year,” Hardy said. “I just recently joined a team in Centreville; they just started up a couple years ago. They’re basically a replacement because most of the high schools out there have teams, but since we don’t have one here I’m allowed to shoot for them.”
There are several different stages in competitive shooting, and Hardy has risen through the ranks to become a precision shooter after starting at the lowest rank, which is supportive row.
“I’m shooting precision now. I used to shoot supporter, and I wasn’t allowed to use any gear,” Hardy said. “Now, I get to wear the big goofy suit and moon boots, but shooting, it improves the score.”
Competitive shooting is not a team sport, but instead showcases the individual’s shooting ability. Since he is by himself, Hardy must remain very calm and not worry about the pressure during the competition.
“When I was on the supporter team, I had other people on the team, but now that I moved up to precision, it’s all individual,” Hardy said. “I don’t really feel anything because you have to empty everything. There will just be TV static in my head, or if there is a song stuck in my head, that’s all I’m thinking about.”
Hardy enjoys the aspects of his sport that make it unique, such as the ability to remain still and mentally focused, and that allow him to stand out with his skill.
“I was attracted to swimming for the same reason because there aren’t any politics behind it. Your score can’t lie; you can’t be put into a game because of favoritism or anything,” Hardy said. “It’s much easier to see where you stand compared to other people, and it’s kind of an individual thing where you’re in control of everything you do.”
Hardy’s dad encouraged him to join the American Legion Post 72’s team.
“My favorite thing about shooting would probably be knowing that I have a skill that very few people possess, even if it’s pretty obscure,” Hardy said. “There is nothing as mentally challenging as shooting. A ‘10’ dot is the size of a 12-font period, and at my level, missing one can literally destroy my score.”
Hardy plans to attend Coastal Carolina University, and he hopes to continue shooting of the college.
“I’m not sure if I want to do anything right out of high school. I’ll go to college first,” Hardy said. “But I plan on joining the Navy and shooting for them.”