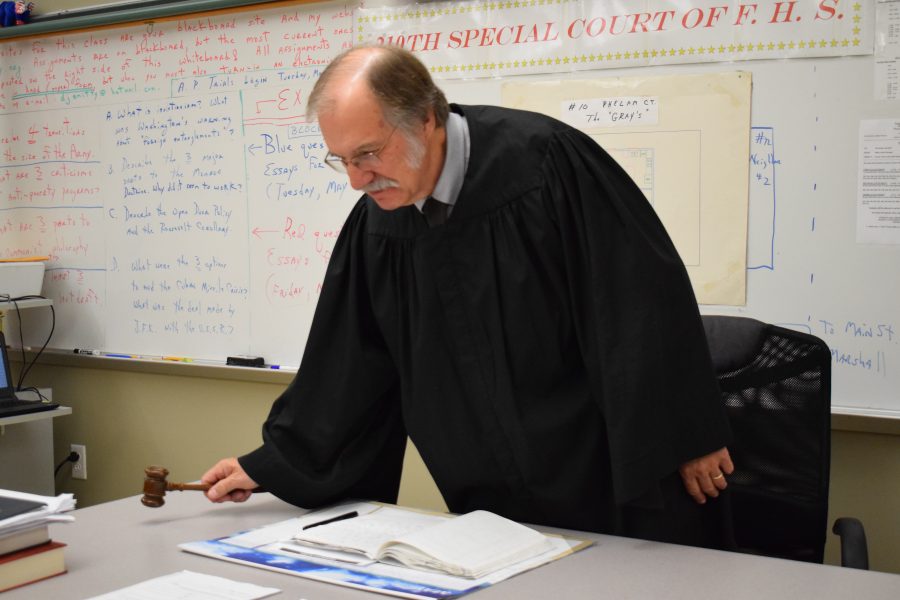 Engaging students with his quirky smile and witty jokes, government teacher David Smith begins class with a news notes presentation on current events everyday, an idea he got from his high school teacher.
“We only did it once a week. Everyone enjoyed [them],” Smith said. “I just felt that, because of the way our society is today, news notes are extremely important [to teach students how to] determine what is the news and how it is reported.”
The class then proceeds to take lecture notes on information students are required to learn for the curriculum, followed by a documentary or movie that pertains to government.
“[I like how] he jokes throughout his lessons. He is very laid back and friendly, which is a nice switch from the usually more professional tone of some teachers,” said senior Delaney Jooris, who has Smith for AP government. “He’s very understanding of how the average student functions. He understands we have other classes with equally strenuous work loads, and knows we can only pay close attention for so long.”
Through the years of teaching government, it becomes easier for Smith to appear politically neutral while teaching.
“It used to be really difficult [to be neutral],” Smith said. “I have learned, over time, how to say things without being [biased] to one side or the other. Sometimes, it’s very difficult; probably more so in this recent [election].”
Smith has lived in Fauquier County since he was born in 1953 in the county hospital, which is now the social security office. After graduating from FHS in 1971, Smith attended Mary Washington College where he majored in history and minored in economics. After graduating, Smith returned to Fauquier County to become a teacher. Over the past 42 years, Smith has taught a variety of social studies courses, including U.S. history, government, and economics.
“I have always had a tremendous love for the legal system. That naturally lends itself to the law and government. The judicial system [is my favorite part], without a doubt,” Smith said.
Over 30 years ago, Smith began incorporating mock trials into his classroom in the early 1980s. He participated in one during a pre-law class in college and thought the experience was powerful.
“We were doing the judicial system in one of my first government classes, and I really felt that students were not understanding the system; there had to be a different way of doing instructing,” Smith said. “I had heard about simulations for elections, so I thought I’d try a simulation of trial. It was just a one day activity, and it evolved into what it is today. I really didn’t know if it would work, and I was really shocked at how powerful it became.”
Every year, students in his AP and core government classes participate in numerous trials, which Smith records and saves. State police officers and members of the F.B.I. and C.I.A. have been witnesses in the trial.
“Because students do [the trials] themselves, they take ownership of whatever role they play. It becomes extremely important to them; they want to win and do well.” Smith said. “[Students] will even talk to me 15 or 20 years [later]. I’ll see them in a store, and the first thing they talk about are the trials. Of course, I’m trying to remember what it was like 20 years ago.”
Smith was influenced to become a teacher by Jim Wilson, one of the first black teachers at FHS.
“He was my supervisory teacher, and he showed me the way to care for students,” Smith said. “He was really active and involved with the students, which I thought was wonderful.”
Math teacher Wayne Leavell, who has known Smith for 19 years, believes Smith’s laid back attitude is a positive attribute to his teaching style.
“Mr. Smith is very, very knowledgeable,” Leavell said. “He has the appearance of being laid back, but he’s very precise and to the point and expects his students to be the same way.”
Smith’s favorite memory from his teaching career was a prank the senior class pulled when he first started teaching.
“Someone put a Volkswagen on top of the [overhang of the] bus ramp. I had a room in the 200s, so I looked out the window that morning, and I saw a Volkswagen sitting on the bus ramp. I hadn’t even noticed it when I came in,” Smith said. “I never knew how they did it.”
Smith’s hobbies and outside interests include the Warrenton Baptist Church, where he has been a member for 50 years, sports, computers and web design, and reading. In October, 2014, Smith published The Alluring Path, a 229 page historical mystery novel. The setting of the book is the Shenandoah Valley during the Great Depression.
“I began it as a short story during free time I had between [teaching] homebound students,” Smith said. “What inspired me to keep on writing was the students in my class. They would hear about it, and kept saying, ‘You can do it! Keep on trying!’ It was historical, and it was about an area I love: the Shenandoah Valley.”
Smith plans on continuing to teach for at least three more years.
“The biggest thing I want students to have is a questioning mind — not accepting anything at its face value,” Smith said. “My favorite part of teaching is when I can see students progress through their senior year and go into either work or further education. I love that.”