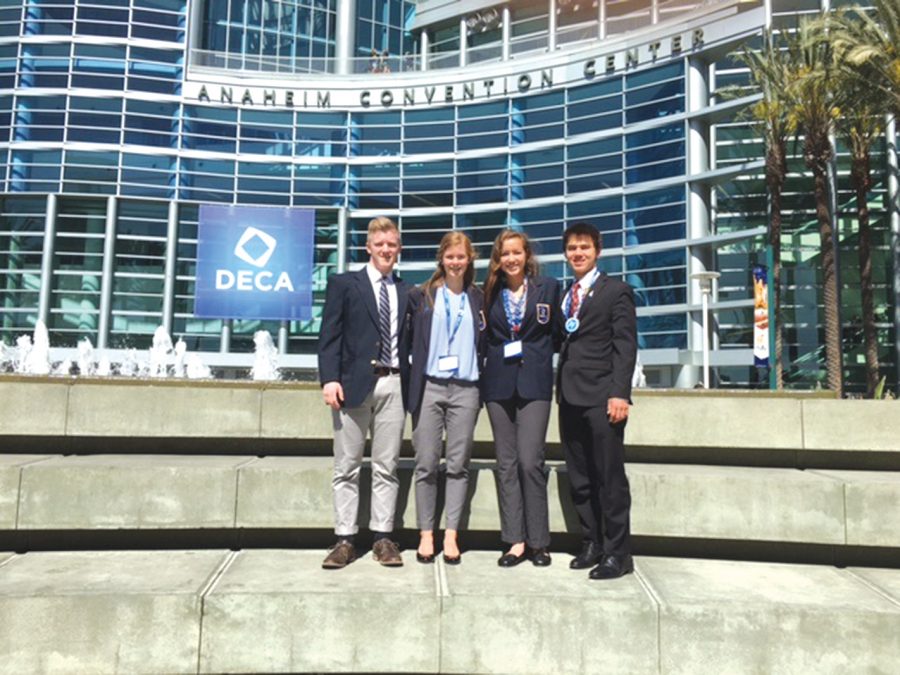 Four students traveled to Anaheim, California, to compete in the national DECA competition from April 26-29. Three seniors qualified for the International Career Development Conference by placing in the top honors category at the DECA state competition March 3-5 in Virginia Beach. Freshman Sam Creveling also traveled to California to participate in the Leadership Academy, attending program seminars and classes throughout the week.
Senior Oliver Wrigley won first place in the state in Sports and Entertainment, while senior Erin Jones took second in Business Services and Marketing. Senior Emma Symanski came in fifth at states for Entrepreneurship Franchise Business plan. They are all still waiting to see the results of how they individually placed and scored at nationals.
At the national competition, Jones qualified to compete in the final round of Business Services and Marketing during the Achievement Awards session. She had placed in the top 10 in her test out of 160-200 competitors, and advanced to finals in the top 20, but didn’t place in the top 10 in the country.
“I couldn’t believe I had made it,” Jones said. “I didn’t even think they had called my name at first. I went into the awards session not expecting much, since there were so many competitors, so to say I was shocked was an understatement. I came down from the stage literally shaking with excitement, and it was definitely one of the coolest moments of my life.”
Jones was extremely grateful to qualify to go nationals since it’s her last year competing in DECA, and she values the “bigger picture” experience.
“Nationals was amazing and a completely different experience than states,” Jones said. “There were 18,000 students there competing, and the energy was something I’ve never experienced before. It really was a once—in—a—lifetime experience.”
Symanski spent the past couple of months working on a detailed, 30-page business plan for a restaurant franchise. She presented it at the state competition and again at nationals.
“Even though Oliver and I didn’t make it to the [national] finals, we are still waiting to see how we scored,” Symanski said. “But I think we both did a good job.”
DECA sponsor Kathleen Lynch traveled with the students to California and chaperoned their busy schedules through an action-packed and ultimately successful week.
“Everyone did great,” Lynch said. “Erin Jones was our one national finalist, which means she got called up on stage as a finalist, and got a medal for her test and her role plays. She competed alongside 19,000 students, so that was awesome. She didn’t make the top three finalists in the country, but we’re really excited that she was in the final competition.”
In addition to the role plays, leadership seminars, and tests, the group had time to go sightseeing around California. They traveled to downtown Anaheim and the Disneyland resort, and then Lynch drove the group through Hollywood.
“We went down Rodeo Drive, Hollywood Boulevard, and Venice Beach, where the water was so cold,” Lynch said. “We got all those touristy things on Saturday before we came back for the grand awards ceremony to see if Erin has placed first, second, or third.”
The four students appreciated Lynch taking the time to get the most out of their trip when they were at nationals.
“My favorite thing about California was was going to the beach,” Jones said. “I had never been out west and had never seen a west coast beach or the Pacific Ocean, so we went to Venice Beach and it was such a cool experience.”
Lynch is proud of what DECA has accomplished this year. Although it is expensive and takes a lot to compete at the national level, she encourages students who would like to travel to nationals in Atlanta next year to start thinking about it now. She and marketing teacher Tiffany Chappell welcome the opportunity to talk to students about options.
“I couldn’t be any prouder of what we’ve accomplished this year,” Lynch said. “The enthusiasm and the drive that these students had with this experience will carry them forward into college, as well, especially the seniors that are moving forward. I would encourage anybody who would like do this next year to be motivated and start practicing, now even. Start looking at improving and looking at what classes to take next year; just get that bug and say, ‘I’m going to do this.”
~julia sexton, news director