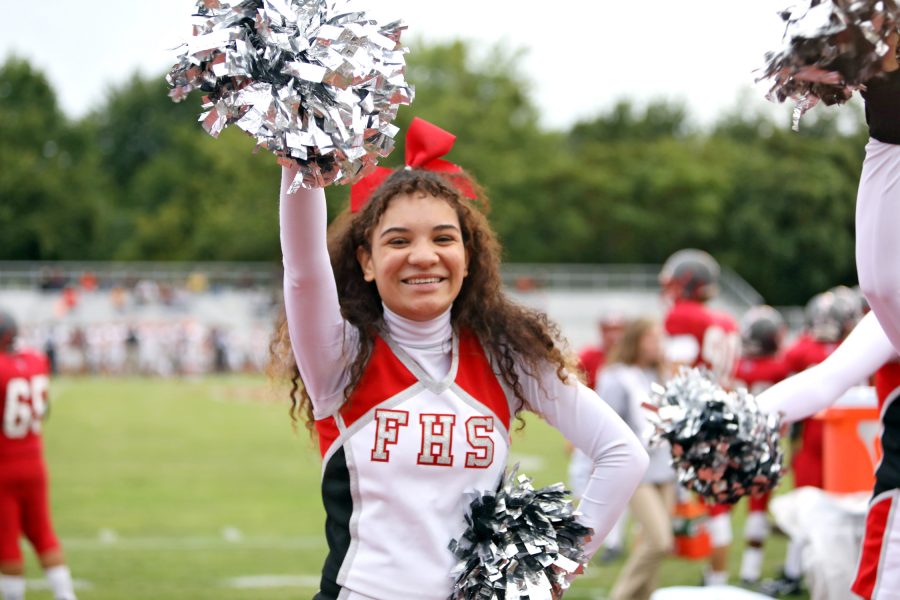 When most people think of cheerleaders, they picture a line of peppy, teenage girls jumping up and down, waving their pompoms in the air at a Friday night football game. What they don’t see, however, are the long, painful hours put into practice, fierce competitions and exhaustion from pushing the body to its breaking point.
“Some people take it as a joke sometimes, just because it’s not a very orthodox sport,” senior Kavena Flores said. “They don’t really think about how much work and effort you have to put into it. It’s like any other sport; you go to practices and have games and team bonding.”
The team practices around 11 hours each week to perfect cheers, tumbling and stunts. According to senior Rachel DeRosa, the team captain, practice is also essential in making sure everyone is on the same page.
“You have to make sure everyone works together, because cheer is the kind of sport where if one person falls or if everyone isn’t getting along [it doesn’t work],” DeRosa said.
Cheerleading requires athletes to execute physically strenuous stunts that often involve throwing or holding team members up in the air or maintaining balance for long periods of time
“You have to go through a lot of training to be able to do the tumbling that you have in cheer,” Flores said. “It’s a lot harder than it looks.”
Besides the difficulty of the stunts, Flores said that many people don’t realize how dangerous the sport can be. One flaw can have severe consequences.
“There’s a big injury risk, especially in stunting, since we’re tossing girls 10 feet in the air,” Flores said. “The flyers expect to be caught and not hit the ground, because a lot of concussions can happen that way.”
With the sideline cheer season in full swing, the team members are representing the school with every bit of enthusiasm they have. DeRosa said she particularly loves being able to contribute to the Friday night football game atmosphere.
“I feel like everyone loves football games, and to get to be a part of the experience is really fun,” she said. “When everyone imagines a Friday night football game, it’s the football players on the field and cheerleaders on the sidelines. I feel like it’s kind of what everyone knows as a football game.”
While the team continues to cheer at football games during the sideline cheer season, it also is preparing to compete at meets, where the team is judged on routines. Last year, they ended the competition season at regionals, where they placed seventh. According to sophomore Brielle Phillippe, competition is much more rigorous than sideline.
“Competition is much harder; it’s fast-paced and you’re getting judged on it,” Phillippe said. “You have to mix in tumbling, dancing, and harder stunts.”
In anticipation of the start of this year’s competition season on Sept. 19, they prepared by brushing up on the essentials throughout the preseason.
“We’re really just focusing on the basics,” DeRosa said. “Like anything, before you excel in it you have to get the basics down.”
~katie johnston, managing editor