Boys basketball shoots into new season: Brizzi and the Falcons look to improve on eight-point record 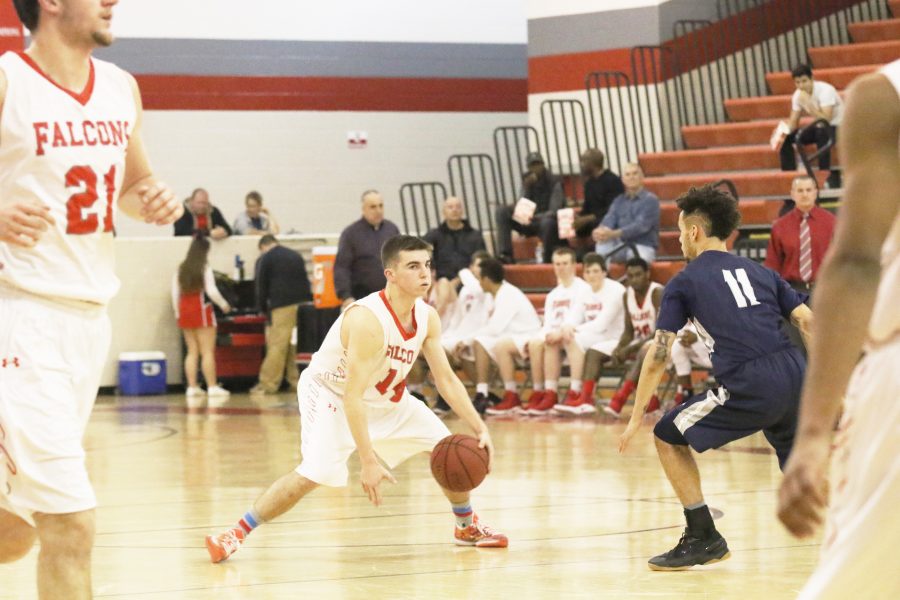 Despite only having an eight-win season last year, the Falcons remained competitive throughout most of their games. This will be used as a fuel to grow for head coach Wayne Brizzi and the boys basketball team, looking to carry their offseason momentum into a new year.
“If the offseason is any indication of our upcoming regular season, we will have a tough and hardworking team,” Brizzi said.
The Falcons will first need to replace Grant Keithley and John Smith, two standout stars from last season lost to graduation. Both were key components to the offense, with Keithley the team high scorer, averaging 15 ppg shooting 42 percent from the field. Smith averaged 10.9 ppg shooting 47 percent from the field. The team will look to seniors Frank Strano and Dakari Mullins to fill the void, both among last season’s top scorers behind Keithley and Smith.
“We know that losing our top two leading scorers from last season,” Brizzi said. “Grant Keithley and John Smith may be a challenge, but I feel excited about this year’s senior class to fill their shoes.”
This season, Brizzi and the team are confident that their training and preparation will help power them through the year, helping them improve the minor details. The Falcons start the season away facing non-conference opponent Charlottesville on Nov. 25.
“Our strong suit is the hard work our players are bringing. We’ll work on becoming more consistent on every possession, both defensively and offensively,” Brizzi said. “Our number one goal is to improve every day and every game, and to be in the mix of the playoffs at the end of the regular season.”