The Hate U Give offers powerful, relevant message about police violence 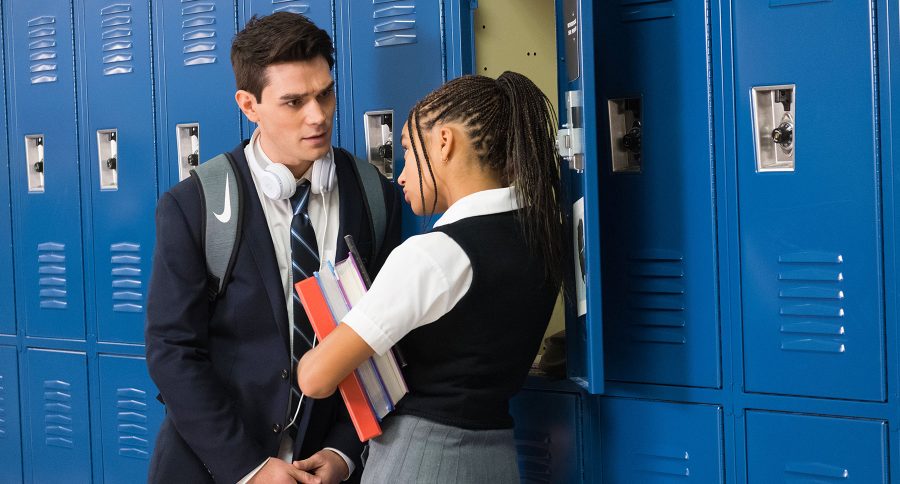 Starr Carter (Amandla Stenberg) and her boyfriend Chris (K.J. Apa) discuss the complications of their relationship.

Police violence against African-Americans is a hotly debated and controversial topic in the United States. George Tillman Jr.’s movie The Hate U Give, based on the bestselling book, tackles that issue head on. It has been a good year for films that garner a political message with movies like BlacKkKlansman, and this is another worthy addition to the genre.
On the surface, it seems like just another teen drama with a slight twist to it: one that panders to teenagers to make box office money. This could not be farther from the truth. The Hate U Give centers around Starr Carter (Amandla Stenberg), a teenage girl who witnesses the shooting of her childhood friend by a police officer when they were pulled over just for switching lanes without a signal. This causes contention around the community, similar to what occurred in Ferguson, Missouri with the shooting of Michael Brown Jr. The film chronicles Starr’s journey as she finds her voice and all the troubles that come with it, such as fitting in with her majority white high school and avoiding the drug dealers who want to prevent her from speaking out.
The best thing I can possibly say about The Hate U Give is that it will inspire viewers to take action. By the end of the film, anybody who received the message will want to storm out of the theater and participate in a local march. Many messages involving racism reverberate throughout this movie. One of the more relevant ones is a comment on the white people who like to act like they are black to look cool, but then disrespect the culture on their spare time. More people like this exist than one would believe, and the movie takes the time to throw some much-needed shade towards them.
The main message of the film, however, is how the public opinion on police violence is that the policeman was just doing his job despite having killed an unarmed man for no good reason. Would that same policeman have done the same thing if it was a white man? These are the questions that this film needed to ask and it definitely succeeds in asking them. It then asks the audience to examine the double standard that plagues African-Americans on the daily.
The shining stars of the film acting-wise are definitely Stenberg as the lead, who really gives the audience an insight into the trauma that one goes through when their friend is murdered right in front of them, and Russell Hornsby as Stenberg’s father, who has multiple stirring monologues that are impeccably well-delivered.
Problems with the film are relatively minimal, but they still surface, and nearly all of them have to do with the final twenty minutes. Without completely spoiling the movie, the ending felt a little sugarcoated given the gritty nature of the rest of the film. It tries to tie all the plotlines together with a bow and claims that love will prevail, but I feel the movie would have had an even bigger impact if it had left us with some of the previous, more hard-hitting messages.
Another slight flaw was a particularly cheesy scene in the end involving the main character’s little brother that I will not get into for spoiler reasons. However, the film came together well other than that, and none of these flaws were enough to degrade the powerful message that the film exhibits in the first and second acts.
The Hate U Give is definitely worth a watch, and will most likely change your perspective on the issue of police violence. This is Tillman’s best film so far, and promises great things in the future for Stenberg.
The Hate U Give will be in theaters everywhere on October 19.
-by Joel Alexander