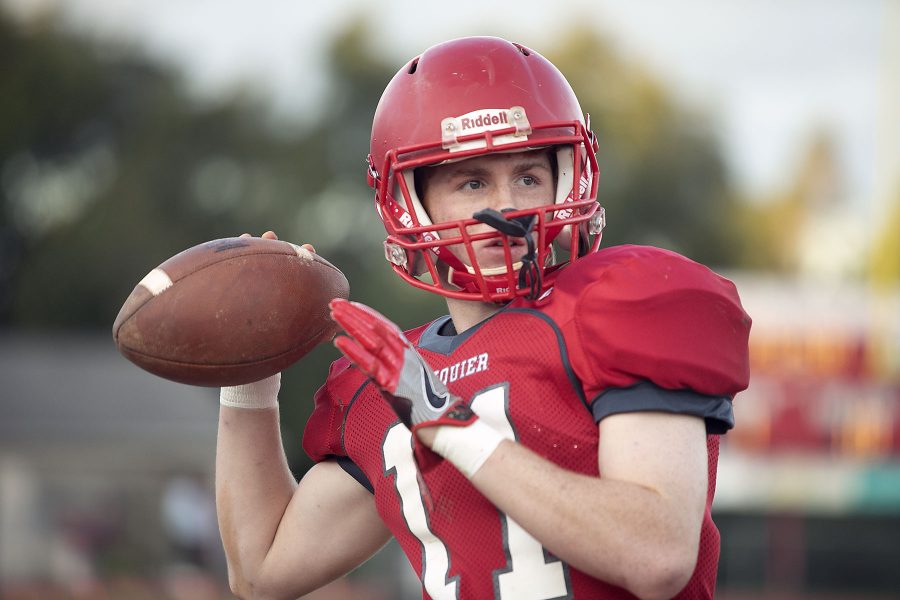 Junior and Wide Receiver Hershel Rinker warms up for the Homecoming game.

Last Friday at Falcon Field, the Fauquier varsity football team battled against the John Handley Judges for the annual Homecoming football game. The game was played on very muddy and wet grass, which made both teams change up their styles because of the condition.
Last week was Homecoming week for Fauquier High School, which included a spirit week, a school-wide pep rally, and a parade. This all led up to the football game and the dance itself. The homecoming game brought the biggest crowd that came out and supported the Falcons all season, and it showed.
“It was really loud,” sophomore Paul Heisler said. “You couldn’t hear the count, which happened when I jumped off sides.”
Falcon Field was very loud during the game, as The Zoo was filled up. “That was a good crowd,” Zoo Captain and senior Carson McCusker said. “Obviously we were disappointed with how it ended, but it was a good game and the crowd was into it pretty much the whole game.”
Fauquier, with some early season struggles, went into the game 0-4, while Handley went into the game 4-1 with their only loss being to Kettle Run High School. Once the game started off, the Falcon defense started well and never really let up. The Falcon offense, however, struggled to get much going. At halftime, the score was 6-0 Fauquier.
During halftime, the 2018 Fauquier High School Homecoming court was brought onto the field and honored. Following this, the Homecoming King and Queen, McCusker and senior Madeleine Hayes, were announced, which allowed both football teams to get a few minutes more rest than usual.
After halftime, both teams picked up right where they left off, both defenses making up for both offenses. Entering the fourth quarter, the score was tied up at 6-6. Once again, both defenses did their jobs in the fourth quarter, until the last Handley drive. The Judges were in the red zone with under four minutes to go. It was fourth and goal for Handley, and they took a shot to the end-zone, when the Fauquier defense stepped up, and smacked to ball to the ground. The Fauquier offense took over with around three minutes left in the game, but never got anything going, so the game carried on into extra minutes.
During overtime, Handley got the ball first, and made the most of it with a touchdown pass to the post.
“That guy when they scored… they had a great scheme going in overtime,” quarterback and sophomore J.T. Diehl said.
The Falcons were forced to score, or else they would lose. Fauquier faced a fourth and goal from the nine, and the Handley defense rose up and made a stop. The Fauquier quarterback was forced to rush a throw, which fell incomplete to end the game. Falcon Field, which was so energetic a few moments earlier, fell completely silent.
The final score was 13-6, John Handley.
“We had some good plays,” Diehl said. “In overtime though, once they scored we all dropped our heads. We need to focus on more practices, and pick up our heads after they score a touchdown.”
Diehl acknowledges that the team could still improve many aspects of their performance, but is still optimistic that they are a hard-working team.
“I think we performed pretty well, but we definitely could have played a lot better.” Diehl said. “I think a bunch of us played super hard, and I think we played overall pretty well, but there’s still a lot of mistakes to be fixed.”
The Falcons play an away game against Kettle Run High School tomorrow night, and Diehl is still optimistic that the team still has some tricks up its sleeve.
“I think that our record does not show how good we are. We can be a better team overall.”