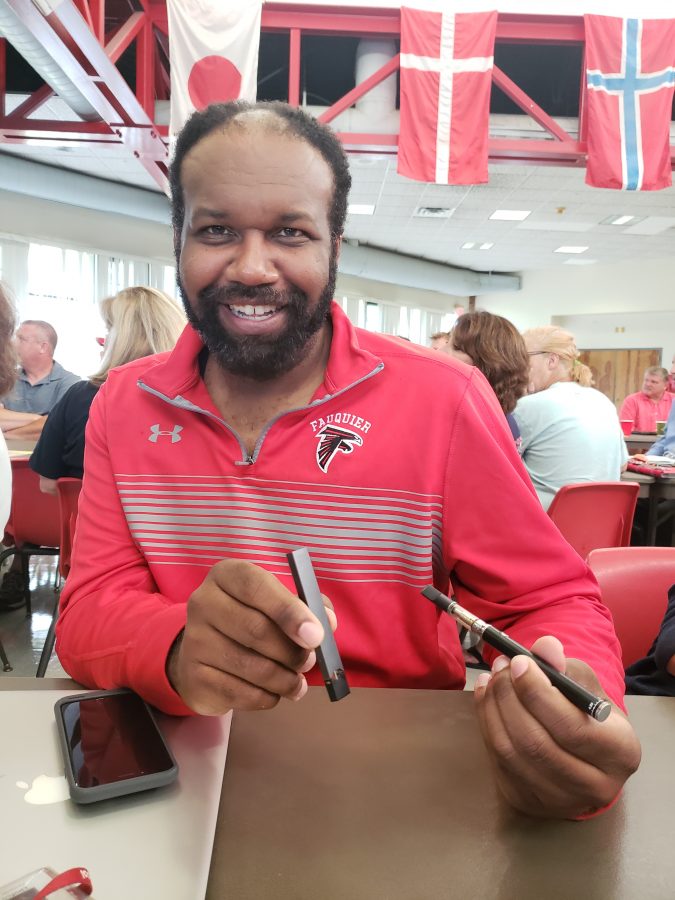 English teacher Lindell Palmer learns the difference between a juul and a vape pen.

There’s no doubt that juuling and vaping has been an issue at FHS. Others juuling/vaping in the bathrooms and some even say they’ve seen students juul in class. This issue has been ongoing for roughly a year now, and students are rising up to put a stop to underage nicotine consumption.
This summer, four FHS students and FHS guidance counselor Mrs. Harris attended ‘YADAPP’, the ‘Youth Alcohol & Drug Abuse Prevention Project’ hosted by Longwood University. The mission of this conference was to develop youth peer leadership that fosters high school prevention of substance use at the state and local levels. Camden Gillespie, a senior at FHS, is one of the four students who attended this conference.
“It was an amazing experience to go to the YADAPP Conference with people who had the same mindset as me,” Gillespie said. “I was able to learn a lot about how drugs affect not only your body, but [also] your mind. We really wanted to provide help for those who need it, which sparked the idea of the help box.”
The help box is new at Fauquier High School. If a student has a concern about another student whether it be juuling, vaping, or anything that could be harmful to oneself, they’re able to write it down anonymously, and place it in the help box. A counselor will then meet with the student  and begin moving forward. Mrs. Harris made it very clear that the help box is not used to “tell on students,” but is for struggling students who need help.
“The help box is not used to get someone in trouble, it’s more of ‘I am concerned about this person and I think they may need some adult help,’”  Harris said.
Students had a lot to say when they were asked their opinion on juuling/vaping and the help box. Senior Gage Russell, a senior at FHS,  said “There is a time and a place for everything, so if you’re going to juul, wait until after school.” When asked about the help box he responded with “I think it’s a good idea, but I also think it could be used for negative purposes. For example, if someone has a grudge against another student, it would be simple to write down someone’s name and slip it in the box.”
Junior Dakota Trimble, shares a similar opinion. “The help box is very stupid. If you are mad at someone and want to start a problem with them, you could just put their name in the box.”
Senior, Jake Trimble said, “The help box reminds me of the middle school ‘bully buzzing’ (which was also an anonymous box where you could report bullying), but I do think the help box could be useful in getting students the help they need.”
Dr. Croft, a science teacher at FHS, feels that the help box is useful. “I think the help box is a good thing, as long as it’s anonymous and people are not abusing it and falsely reporting students to get them in trouble. But I think the counselor will be able to figure that out in case that happens.”
When asked her opinion on students juuling/vaping, she replied with “I think it’s very stupid. It’s dangerous because they put extra chemicals in those things. Chemicals like fentanyl, which are in some juuls and vapes, could really hurt you.”
Will the help box bring awareness to a sensitive, but vital issue at FHS? It is certainly a move in the right direction.