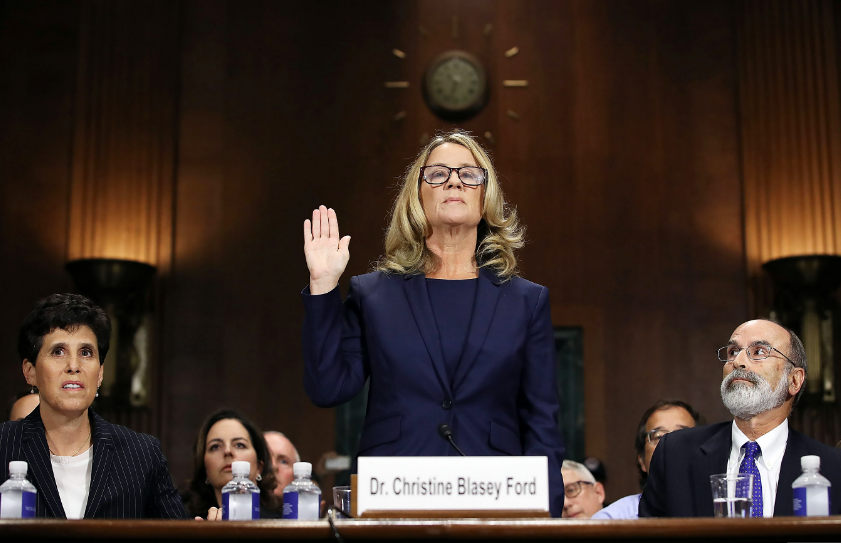 Christine Blasey Ford swears in during he testimony in front of the Senate Judiciary Committee.

The Brett Kavanaugh confirmation process has proved to be one of the most controversial and dividing chapters in United States history due to the accusations from Christine Blasey Ford, a psychology professor from Palo Alto University. Kavanaugh has repeatedly and angrily denied these allegations with Republicans backing him, but many of the Democratic senators are convinced he is lying, which has created contention between the two parties.
At this point in time, Kavanaugh has been officially confirmed to the Supreme Court, which shows that America’s priorities do not lie in whether a nominee is actually qualified to be a justice, but whether the nominee will benefit their party. Kavanaugh proved countless times in his testimony that he is completely unfit to be a bipartisan Supreme Court justice, with his emotional temperament and blatant lies.
Ford’s testimony, directly after, was considered to be credible even by non-believers of her claims. She never avoided a question, all of her claims were proved to be credible, and she has absolutely no reason to ruin her life just to “conspire against the Republicans.” Kavanaugh has now been nominated, and Ford’s life has been certifiably ruined, with her actually having to move out of her house due to the copious amounts of death threats she was receiving. And somehow people still blame her for spreading false accusations that they don’t for sure know are actually false.
Unlike Ford, Kavanaugh constantly avoided questions during his testimony, often refusing to answer questions that would be painfully simple had he been completely innocent. When one senator asked if he had ever been intoxicated to the point of not remembering events from a party in that time of his life, he replied “I don’t know, have you?” What kind of innocent man would say that under oath? He was also asked by another senator if he would support a full FBI investigation into the charges, and he refused to answer the question. If he was innocent, then he would be overjoyed to support an FBI investigation because it would prove his innocence. If I had been accused of murdering my wife, and upon being asked if I had done it I refused to answer, then people would have reason to be suspicious, as should they here.
One of the most important aspects to consider when confirming a Supreme Court justice is the nominees’ temperament, whether it be anger or emotion. A justice on the Supreme Court is not supposed to be extremely emotional about certain issues, and is supposed to be calm and collected in strained situations. The characteristics that I just described to you are the opposite of the ones exhibited by Kavanaugh during his trial. He cried in the the most odd moments: when he was talking about how his friends worked out frequently, when he detailed reading old calendars with his father during Christmas, etc. He also had numerous spouts of sudden anger that caught everybody at the hearing off guard. If Kavanaugh responded like this to important issues plaguing America in the Supreme Court, he would be seen as biased and partisan, but just because Republicans wanted the majority it was willfully pushed under the rug.
Even if all of the sexual assault allegations are ignored (which they shouldn’t be), the temperament issues alone, in a normal world, should be enough to immediately disqualify him from a seat on the Supreme Court.
Kavanaugh also blatantly lied about quotes that were pulled from his high school yearbook. Throughout his yearbook entry, there are references that quite obviously allude to sexual encounters with fellow classmates, but he has created alternate meaning for these references. There are many of them scattered in this entry, but one of the most blatant lies is his excuse for the reference of the Devil’s Triangle. The Devil’s Triangle is a very specific sex act that involves two men and one woman, one that is relatively widely known. However, when asked, Kavanaugh claimed that it was a “drinking game.”
No, it’s not. I’m not sure what parallel universe Kavanaugh is living in, but a Devil’s Triangle is definitely not a drinking game. This is a blatant lie, and yet it, like so many others, was glossed over by all of the Republican senators who simply want a majority on the Supreme Court.
Kavanaugh’s conformation is a direct insult to sexual assault survivors all over the United States. Republicans could just as easily have found a legitimate nominee that did not have multiple assault allegations, but they decided Brett Kavanaugh was the one simply just to throw it in the Democrats’ faces. This case says to women all across the country, “Don’t come out with the truth, because nobody will believe you or care about what you have to say in the end.” The white male hierarchy of leadership has always unanimously controlled this country, and Kavanaugh’s confirmation has expressed to all Americans that it is no closer to changing than it was in the 80’s.