Sierra Burgess is a Loser Loses Applause from Audience 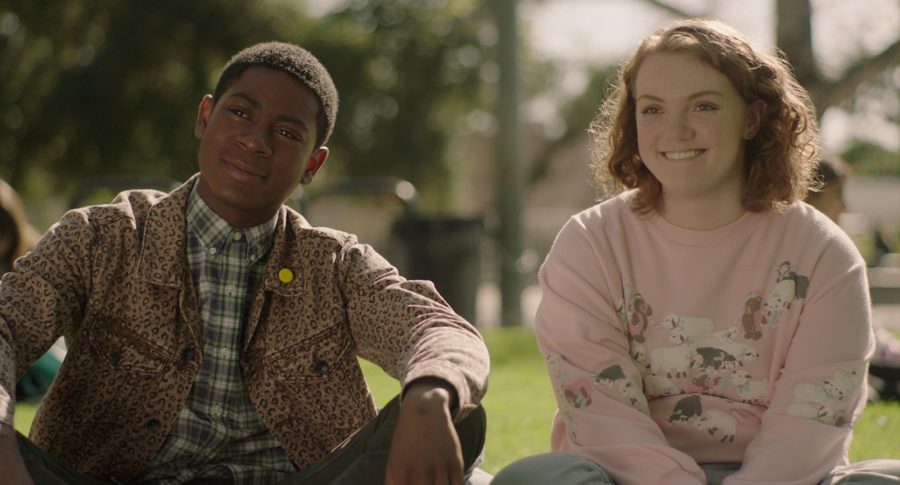 Sierra (Shannon Purser) and Dan (RJ Cyler) talk about Sierra's conundrum with a boy she likes.

Sierra Burgess is a Loser marks Netflix’s second teen comedy in the span of a month. For some reason, they are going overboard on the high school films recently, and they’ve quite honestly been more miss than hit. However, after viewing the competent and entertaining To All the Boys I’ve Loved Before, I hoped that this one would be quite the same, if not better.
Boy, was I wrong.
The plot centers around Sierra Burgess (Shannon Purser a.k.a. Barb from Stranger Things), an unpopular and overweight teenage girl who winds up texting and falling for a boy (Noah Centineo) who thinks she is a much more beautiful girl than she appears to be. For those uneducated in the culture, this is called “catfishing,” and is a very mean and deceptive way of using the Internet. The film, somehow, expects the audience to cheer for Burgess even though she is taking advantage of someone like this.
With all of this aside, Sierra Burgess is a Loser is essentially the typical high school movie. The movie stars an antisocial character and her only friend who end up getting thrust into the popular crowd, and by the end of the movie, the main character starts dating the boy of her dreams. Sound familiar? That’s because it’s literally every single high school movie ever made. Every teen comedy in the last decade has had a plot similar to this, if not exactly the same.
Some films, however, decide to twist things up with a unique plot, good acting or some other aspect special to the movie. This film does no such thing. Even though the plot attempts to be different with the “catfishing” premise, the main character and the relationships are so poorly executed that it is very difficult to care.
All of the interesting and well-acted characters are the supporting ones; such as Veronica (Kristine Froseth), who has a very intriguing relationship with her mother (Chrissy Metz, who is wasted here) and siblings that is not explored at all. Jamey, the boy who is being catfished, is also a good character, but is again essentially ignored by the writers. The only funny moments in this so-called “comedy” are delivered by RJ Cyler, who plays the token black best friend, but he is in the film very little and is reduced to stereotype.
Sierra Burgess is a Loser is built on the foundation that the audience will feel sorry for Burgess and her situation. However, she has easily the best life out of anybody in the film. She has a best friend, which is something that not everybody has; she has two parents that care for her; she is incredibly smart, and she is applying for colleges like Stanford. The movie expects us to feel sorry for her when there are other characters in the movie who have abusive parents, deaf siblings, and bad grades.
Another main message that the film gives is that it does not matter how a person looks, but it only matters how they are inside. This is a fabulous message, but the film has no foundation for this message, for the main character is a terrible person. It is hard to see the beauty on the inside of the main character when she is blaming everybody else for her own problems. Plus, near the end of the film, Burgess destroyed what likability there was by committing a despicable act which I will not disclose.
In the end, Sierra Burgess is a Loser is just an overlong build-up until the main characters start dating. By the end of the first ten minutes you can tell they are going to get together, but it takes an hour and 45 minutes to get there. If that sounds like something you’d want to watch then go ahead, it’s streaming on Netflix now, but if that sounds even remotely boring to you, then stay away from this film like the plague and watch Black Panther instead.