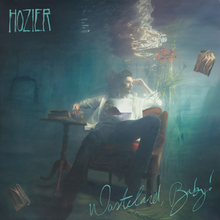 After an almost five-year hiatus, Irish singer-songwriter Hozier released his second album Wasteland, Baby! on March 1. Many know him from his successful debut, “Take Me to Church,” which hit No. 2 on the Billboard Hot 100. Although his newest album is a small step down from his debut album Hozier, and an obvious hit chaser, his distinctive voice sets a high bar and it’s truly an album listeners can get lost in.

Before the drop of his album, he gave fans a few sneak previews. “Nina Cried Power (feat. Mavis Staples)” was by far my favorite. In this song, Hozier gives homage to artists who have helped shape rock ‘n roll, artists such as Nina Simone, Joni Mitchell, Billie Holliday, James Brown, and Mavis Staples, who was featured in the song. Mavis Staples’ voice paired with Hozier’s resulted in lush harmonies and a rich blues-rock sound. Hozier has been known to use meaningful lyrics and in this song, he clearly demonstrates that. Lyrics such as, “And I could cry power/ power has been cried by those stronger than me/ straight into the face that tells you to rattle your chains/ if you love bein’ free,” highlight the central meaning of the song and the struggles suffered by those who shaped blues and gospel music during the Civil Rights Era.

I must admit that there were a few songs in the album I just could not get into. I could tell he was trying too hard to make another hit and it spoiled the album. A clear example is “To Noise Making (Sing),” which is probably my least favorite song from him. It has a good message–the power of singing regardless of talent–yet it feels empty. It just sounds like he just wanted to make an indie song to clap to or play in the background of a coffee shop. Regardless, there are many songs that I could never get sick of if I were to play them on repeat. Hozier has such a profound voice and sound it’s hard to absolutely hate any of his music. “Wasteland, Baby!” is the perfect album to play when you just need a little inspiration and soul in your life.