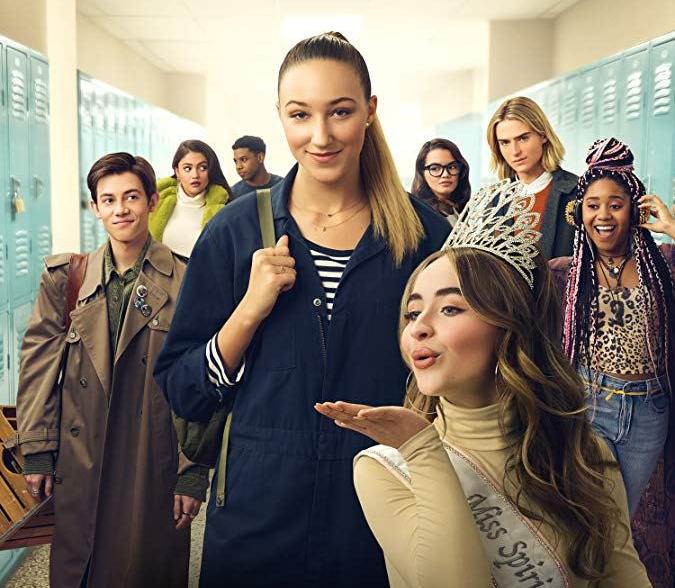 The cover of the movie expresses the personalities and influential characters in the movie.

When it comes to cheesy, teenage romantic comedies, Netflix is not one to shy away. So I was not surprised when the streaming service announced in November of 2018 that the film “Tall Girl” would be joining the never-ending crowd of high school romance movies.

“Tall Girl,” directed by Nzingha Stewart, follows the life of a 6-foot-1 teen Jodi (Ava Michelle) who is struggling to fit in at her high school because of her height. Because of this, Jodi lives most of life feeling insecure and misunderstood. But, when a tall, Swedish foreign exchange student named Stig (Luke Eisner) comes into town, she sees her chance to find someone who doesn’t just see her height.

This movie definitely doesn’t get any awards for originality. There’s the anti-social main character, the handsome guy of her dreams, a strong-willed best friend, and the creative character list continues. The only reason this movie didn’t completely morph into the basic Netflix rom-com is that Noah Centineo wasn’t in it.

Not all the characters completely bored me. Jodi’s sister Harper (Sabrina Carpenter) is a beauty pageant competitor who Jodi harshly compares herself to throughout the movie. Although she isn’t the most creative character ever made, I enjoyed her scenes, which I would say were the more comical parts of the movie. Fun, relatable Jack Dunkleman (Griffin Gluck) makes up the third side of the love triangle bringing more quirky, awkward comedy with his obvious mooning over Jodi. His quirky, awkward character also added more comedy to the movie and was way more relatable than the main character.

Tall Girl’s central theme of self-acceptance and the attractiveness of confidence is a message that every awkward teenager struggles to believe. Other messages Stewart sends include the value of family as Jodi’s and her father and sister work through their misunderstandings and grow closer as the film winds up. The scene with Jodi and her dad Richie Kreyman (Steve Zane) enjoy a heartfelt scene playing the piano together, and it seems as if they are finally beginning to understand one another. Jodi and her sister also have one of these moments where they realize how much they mean to one another. Both of these scenes stood out to me, and it was refreshing amidst all of the typical main storylines.

In the end, “Tall Girl” did not blow me away with its characters or the plotline. In fact, within the first two minutes of the film, I knew exactly what was going to happen and what each character was going to be like. But sometimes in all the uncertainties in life, a little predictable, happy ending escape is exactly what we need. Despite this, “Tall Girl” added a few elements that made it slightly better than a typical Netflix romance. I especially enjoyed the ending which, although predictable, wrapped up the moral of the story in a beautiful way. I would not say “Tall Girl is a must-see, but I would recommend you check it out if you have nothing better to do, or if you’re in the mood for a basic high school romance movie.