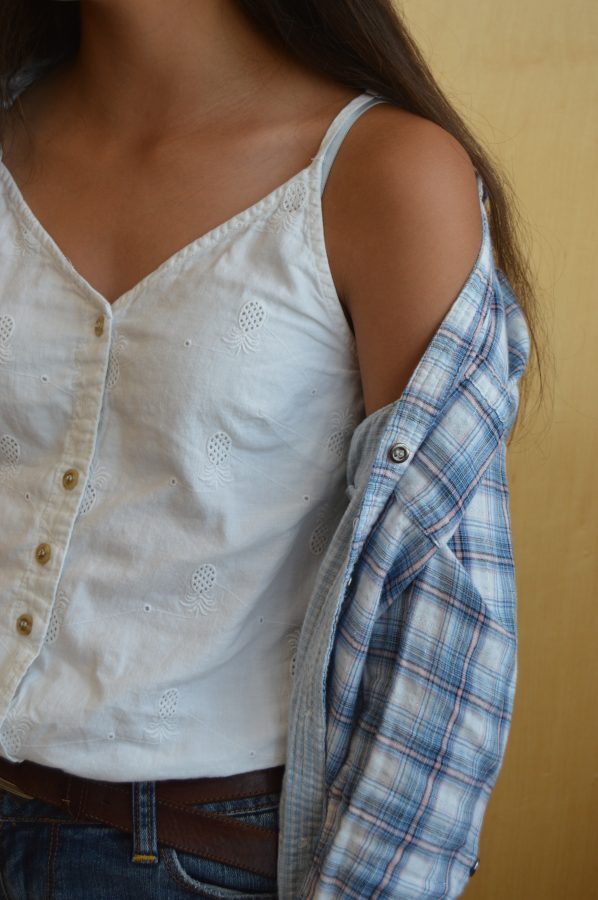 Abiding by the dress code by covering up outfits that the school does not approve of.

Dress codes are notorious for being the bane of a student’s existence in high school. This year, the dress code received more attention from administration, which they decided needed to be enforced more strictly.

The Fauquier High School dress code does not ask much of the students. It is, in fact, quite lenient compared to other schools. However, certain parts of the dress code that were emphasized this year such as bralettes and headbands frustrated many students.

The first concern many females have regarding the dress code is the banning of bralettes. According to the school dress code, “Clothing designed as underwear shall not be worn as outerwear.” It’s a fashion trend to wear bralettes under a shirt where usually only the straps are visible. Yet, the school banned this because a bralette is considered underwear and should be concealed.

The confusion is how contradictory this rule is. If a girl’s bralette strap is showing, too much is showing, but if she has her sports bra strap showing, that’s okay? The rules state that “shoulder straps shall be a minimum width of two fingers,” and bralettes meet this requirement. Yet, it’s the fact that they are considered underwear that makes them bad. Is the issue the lace? Is that too “sexy” for the school to handle? Of course, we don’t want girls running around the school with just their bras on, but banning even the sight of a little bit of lace on a strap is wrong.

School dress codes are well known for being discriminatory towards females, and this is a perfect example of it. Why are schools teaching girls that it’s their fault when their peers can’t stop looking where they are not supposed to? Instead, we should be teaching students how to be respectful towards others. No girl should be told that she’s “asking for it” when she wears something as simple as a bralette under her shirt.

Another concern was the banning of headbands. The dress code states, “Hats, head covers, headbands, sunglasses and excessive headwear are not to be worn in the building.” The headband regulation does not include the type that keeps your hair pulled back, but rather headbands that are worn across one’s forehead, as well as other variations such as bandannas.

During the class assemblies, they announced that durags were not allowed in school. This hurts students more than it helps them. The durag ban prohibits students from connecting to their culture, and teaches them that society will not accept them if they wear this head garment.

Schools should be teaching students to be proud of who they are and instill self confidence into their students. In the final analysis, we understand that schools need dress codes to keep the learning environment in order, and to teach kids the importance of proper dress. However, certain rules under the dress code are simply unfair and sexually and racially discriminatory.

Along with this, will these rules actually be enforced? Being about two months into the school year, it doesn’t seem so. Students are still coming into school with crop tops and bralettes. Students don’t take the dress code seriously because administrators don’t enforce it. We can talk the talk, but if we can’t walk the walk, then what’s the point of having a dress code?