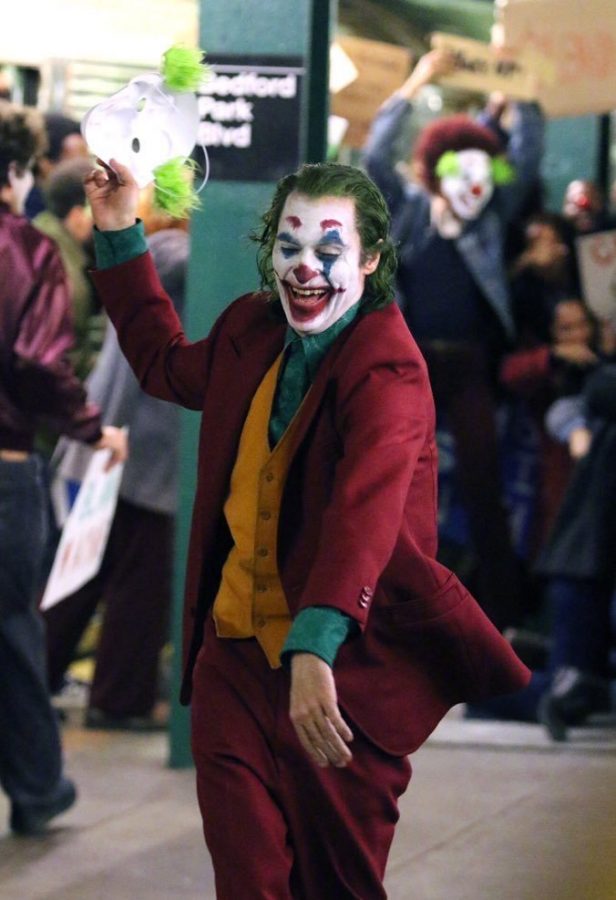 The joker in the street during one of the scenes in the movie.

“Joker” is an intense yet utterly brilliant character study which grapples the movie-goer’s attention from start to finish. Inspired by Martin Scorsese’s 1970’s hit Taxi Driver and his 80’s success of “The King of Comedy, Joker” depicts the stark and violent descent into madness of the mentally ill failed clown and stand up comic, Arthur Fleck.

Throughout the movie, it illustrates how a ravenous 70’s esc society can drive a person to the point of violence. Though it’s controversial nature, the movie doesn’t sympathize with one single viewpoint.

Within multiple instances of the movie, the main character goes through serious physical and mental abuses, to which his actions at times seem justifiable. But as his descent into madness deepens as the plot progresses, you begin to feel more and more disgusted as Joaquin Phoenix’s Joker becomes increasingly violent and homicidal.

Going into this film blind I expected nothing less than a mediocre “Taxi Driver” knock off in a drab superhero manner, and leaving the theater, I was thoroughly surprised. With the Oscar worthy performance of Joaquin, the chilling score by Hildur Guðnadóttir, the masterful cinematography and plethora more aspects of this meticulously created film, I was stunned.

The wonderfully written story riddles you with anxiety, unknowing when Arthur will finally snap, and combined with Phoenix’s near perfect performance it will literally keep you on the edge of your seat. Not to mention the satisfaction gained when Joaquin finally puts on the iconic make up, strutting his joker swag dancing around Gotham.

The color grading utilized unique contrasts to set the mood. The pacing of the movie was as smooth as butter.

Everything about this drama thriller just screams movie of the year, and though it remains controversial, it has every right to win at the Academy.