A Worthy Remake With A Disappointing End 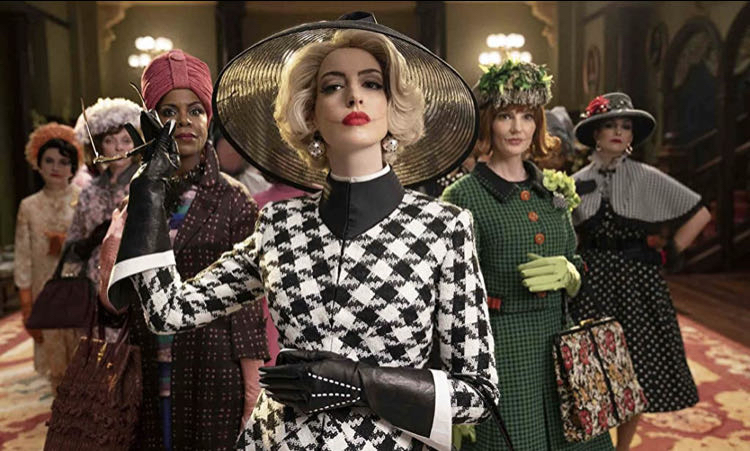 The Witches arrive at the hotel to attend the Royal Society for the Prevention of Cruelty to Children, a ruse to cover their meeting.

Starring Anne Hathaway, Octavia Spencer and 12-year-old Jahzie Bruno, The Witches remake was released on October 22. A worthwhile film for viewers of all ages especially if you have seen the original 1990’s production. Although it doesn’t give the original film a run for its money, this youthful tale is sure to bring a smile to your face.
Based on Roald Dahl’s 1983 novel, The Witches, this remake draws parallels between the book and the original film. The connections were enjoyable because I was familiar with the plot, but something new and inventive was sure to pop-up.
After recently orphan, Charlie Henson played by Bruno, encounters a witch, his grandmother, Agatha Henson played by Spencer, decides it’s time to leave. They go to a hotel and encounter an evil figure from Agatha’s childhood, the Grand High Witch played by Hathaway. Although the hotel is too small to be entirely safe and Charlie finds his way right into the middle of the biggest Witch Convention of his life.
Southern expressions from Agatha bringing voice to the film with the innocence and surprise of Charlie creating the perfect pair. There’s a sense of connection between the two that resembles a real-world grandmother and her grandson. Overall, I liked the casting, it was interesting to see how they all interacted with one another on set.
I enjoyed the storyline. It’s a magical story yet not too childish that teenage and young adult viewers get bored half-way through. Between being “mouseified” and witches with claws, no toes, wig rash and nostrils that could expand eight inches, producer Robert Zemeckis lives up to his famous job of special effects and cinematography.
Known for being at the forefront of technology, Zemeckis doesn’t disappoint. With the vibrant colors and humor that brings a laugh, the film is very entertaining for viewers. Sticking to the more modern avant-garde theme he is known for, the 1960s aspects still shine through. I think I prefer the witches from the original but these witches fit better with the overall atmosphere of the movie, so in a way, it is hard to compare.
The hour and 46 minutes goes by in a flash. I guess the saying, “time flies when you’re having fun,” is true. Zemeckis knows how to pull the viewer into his adventures making you feel like you’re in the movie running around trying to save the day.
Unfortunately, this movie did not outshine the original, and I was disappointed in the ending. The other part I didn’t enjoy was how the movie was narrated by an older version of Charlie, played by Chris Rock. The mouse recounted his story to a class of students. It was frustrating to watch it all the way through and come up with a million other ways it should’ve ended. However, it was heartwarming to see them all happy, and the grandma watching her grandchild as they grew old together.
The movie may not have been one of my favorites, but I would watch it again. Zemeckis did a good job of remaking the film from the casting to the special effects; I found it fun for all occasions and filled with twists.
If you’re ever looking for a family-friendly movie with good morals like forming a friendship and making the best of what life gives you, then watch The Witches. And if you’re really in the mood, watch the 1990’s version and find out which you prefer.