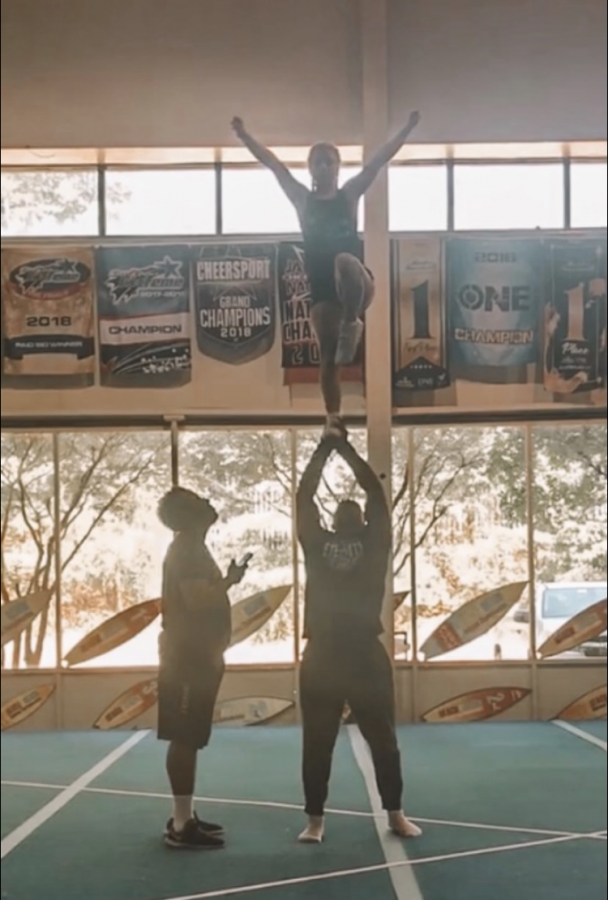 Cheering for a worlds level team, All-Star Cheerleader Ryleigh Shackelton is flying in a partner stunt.

Since the age of five, sophomore Ryleigh Shackelton has spent her time in a gym. First, it was with gymnastics and then when she was 12 years old, she found a new love for all-star competitive cheerleading. Shackelton, after years of hard work and dedication, made it to an elite level world team, as a flyer, at 15 years old. Then she got injured.
One night during practice, Shakelton was doing a tumbling pass and landed wrong. She felt a crack, a crack that tore her ACL (anterior cruciate ligament) and meniscus. This landing sprained her MCL (medial collateral ligament) and FCL (fibular collateral ligament) and created two bone bruises. The injury also affected her foot, by bending three bones. She had two surgeries on her knee and a bone stimulator on her foot. “I’m about three months out of surgery now and rehab is hard but each day it gets a little easier,” said Shakleton.
All-star cheer takes a lot of discipline, according to the United All-Star Federation (USAF). Cheerleading practices can be two to three hours long and are as often as two to three times a week. A regular season is all year long, with tryouts in spring and practices throughout the summer. Competition season is from fall to spring of the following year.
All-star cheerleaders are “athletes in every sense of the word and work hard to dispel any biased assumptions of what a cheerleader should be,” states USAF. All-star cheer includes tumbling, dancing, cheering and stunting. Stunting is when a group of athletes lift another athlete into the air individually or to create formations in a pyramid.
For the first time since the age of five, Shackleton was faced with the idea that she might never be back in the gym. “It was devastating,” said Shakleton. However, she is not ready to give up. Her surgeon was able to repair 90 percent of her knee.
Her hope is to cheer one last season on the Stingray All-Stars Venus and Atlas team. However, it will never be the same. “An injury like this definitely puts me back and I will not be able to tumble ever again. I will come back to just stunt and fly,” said Shakelton.
For now, Shackleton is at practice and competitions to support from the sidelines until she is fully recovered. Despite it all, she found a silver lining, “I learned a lot more about myself and it made me stronger, mentally, through everything.”