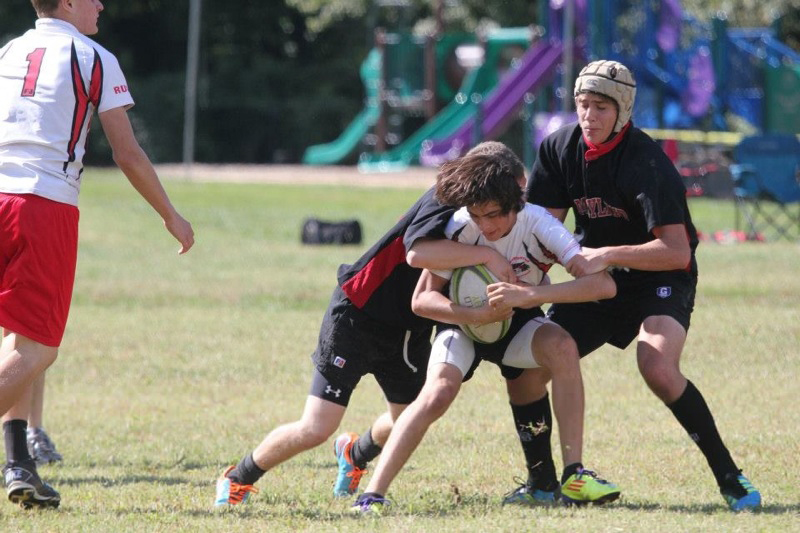 Junior Anthony Wright is tackled by rivals during a rugby match.

When one discusses a fast-paced, hard-hitting sport, the first thing that comes to most American’s minds is football. But, rugby actually much faster and tougher than football. The Warrenton Wolfpack, the local youth rugby club, has been playing since 2007.
“[Rugby] looked like a fun and interesting thing to do,” junior Anthony Wright said. “It was so different from every other sport I’ve ever played or heard of. You have to have more focus to play rugby; it is not like football. Games can change at any time, so you have to have a positive mentality.”
As the precursor to American football, rugby combines the finesse of soccer with the physicality of football. Behind soccer, rugby is the second most popular team sport played around the world. Although it is not as popular in America, a 2010 survey by the National Sporting Goods Manufacturers Association ranked rugby as the fastest growing sport in America.
Rugby matches are mainly played during the spring, summer, and fall, but the players practice year round. People who come new to the team have to suffer through veterans, such as junior Brady Burr, showing them the ropes.
“The big thing is just teaching them the rules,” Burr said. “Some guys can be un-athletic types, but they can be very good at rugby if they just know the rules.”
In rugby the ball can only be passed backwards. When the ball goes out of bounds, it is thrown back in by the team that did not put the ball out of bounds. The most complicated rule in rugby is offside. Generally speaking, if you are on the offense team and are in front of the ball, you are offside.
“I wanted to play for a year or two,” junior Marcus Smith said. “I wanted to give a new sport a try and I love it. I’m still a little lost with all the rules and stuff, but I still like it.”
Scoring in rugby is called a try; a player scores a try by crossing the try line and placing the ball onto the ground. Play is continuous, much like in soccer, and is stopped only when there are penalties or if the ball goes out of bounds.
Playing rugby takes not only strength, but serious endurance and stamina because play is rarely stopped.
“I like the intensity of [rugby],” Wright said. “Rugby is very fast-paced and keeps you on your toes. I also like the shorty-shorts.”
Senior Tyler Kovalik has been playing rugby for five years, and finds that the most exciting part of rugby comes from the team, not from the physical play on the pitch.
“I like the team unity,” Kovalik said. “When we are out on the field, there are 15 guys working as one organism; it’s exhilarating.”
Although Warrenton is the Wolfpack’s home base, the majority of games are played out of Fauquier County. The team participates in major tournaments up and down the East coast. The Wolfpack has placed top three in tournaments in North Carolina, New Jersey, and Pittsburgh and they have had nine players nominated for the Virginia All-State rugby team in the summer, 2012.
The spring season officially began March 16. The Wolfpack holds open practices every Tuesday and Thursday at the American Legion post in Warrenton. Anyone can show up as long as you are ready and willing to play.