A Successful Season Continues for the Boys Lacrosse Team 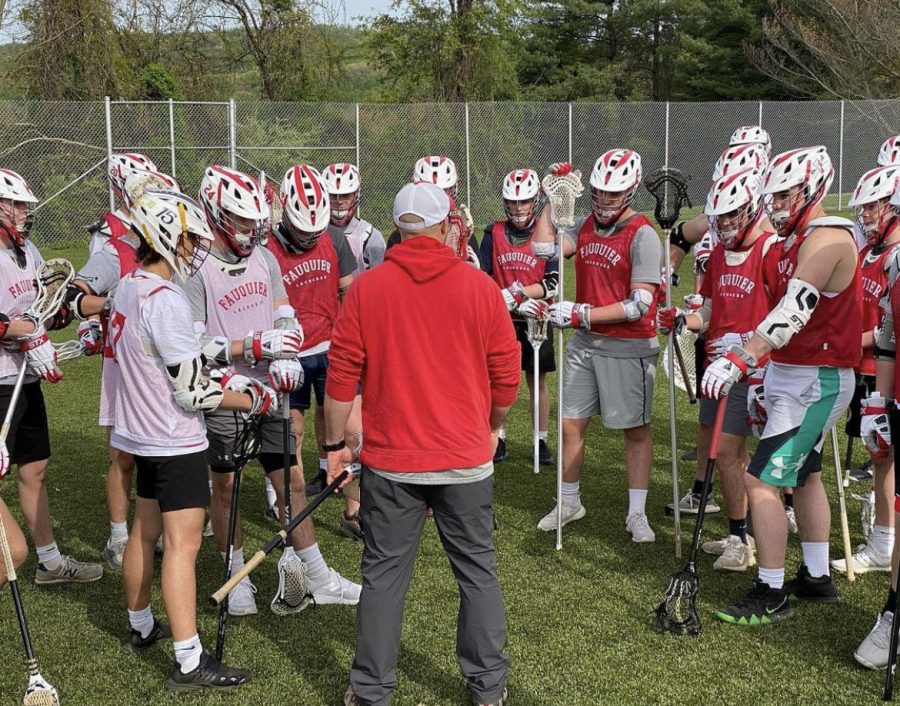 The boys lacrosse team is very committed to their season performance with practices even taking place on some Saturdays.

Reaching to accomplish team goals, the FHS boys lacrosse team only has two away games before postseason begins with a current six-one standing. Varsity Head Coach JB Tippett credits the team’s success to their teamwork. “Each guy has a job and they do their best every time they are on the field. Beyond that the team has done a great job at maintaining a high tempo offense and has done fantastic transitioning to a new style of defense,” said Tippett.
Senior night was May 27 and the team recognized their senior players on the Falcon Field before winning their match against John Handley High School. Two out of the three varsity captains are seniors, Shane O’Hara and JT Diehl. O’Hara is “happy with the season so far” and continues to see improvement in the players each game. He is also glad to be back on the field but plans to “improve on making smarter decisions on offense and moving the ball better.”
Tippett said after disappointment because of last year’s season cancellation due to the COVID-19 pandemic “the players are more ready to play. There’s been an excitement building since we first got back together. This season has a bit more want and desire to be out there.” To prepare for this season the team did many offseason training sessions that allowed them “to get together and play,” said Tippett. However, this year came with its own obstacles because of the shortened period during pre and regular game season.
To prepare for games the team meets early to talk about their game plan. Then the players have free time before working on their technique for the upcoming game. According to Tippett, the team also continues the hard helmet tradition where a “player, that gives the best effort in the game,” is handed the hat.
The team created many goals for this season. According to Tippett the top objective was to win Regionals and go to States. He also “challenged each player to develop both individual goals at the beginning of the season.”
Additionally, this year the team joined with Morgan’s Message, a student-athlete mental health organization, during May since it was Mental Health Awareness Month. “As a coaching staff, we are very aware of the challenges our players face both on and off the field. We are keenly aware that everyone will struggle at some point in their life and want them to have open and honest conversations about their issues,” said Tippett. “Through this we try to instill the ideals of resilience within our players – kind of like a tennis ball. When something bad happens we try to get our guys to bounce back after a mistake.”