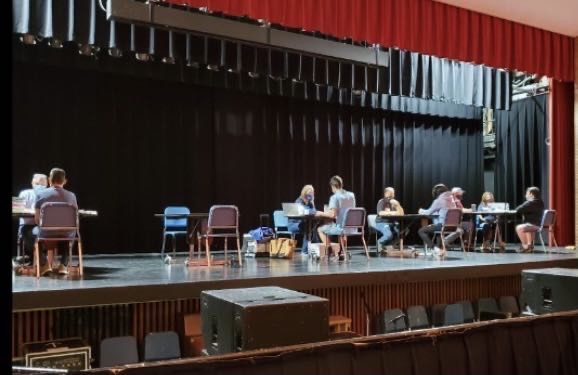 Sparking the minds of future electricians, George Clark’s class experienced a one day job fair in the FHS auditorium to practice interviewing skills. From this April 30 training session, led by Kettle Run High School’s Mark Frazier, local vendors offered two students jobs.
Students enjoyed the job fair event and shared positive feedback with Clark. “They tell me they are no longer afraid to sit down in an interview with a total stranger. They feel like they know what to say and do in the interview. They feel a higher confidence level in an area (interviewing) that can be very stressful for most adults,” said Clark.
Additionally, Clark said the vendors present were “very surprised at how well the students interviewed. They also said that they did not realize that high school students had the ability to install such a high level of quality electrical work.”
This is Clark’s first year teaching high school students. He traces his background in electricity to his teenage years as a student at FHS. He worked for a family company which taught him “a lifelong skill in the electrical trades. I would like to pass this on to students with the desire to work in the trades industry while furthering education,” said Clark.
He hopes to run an event like this again and “bring in a larger range of vendors to support more CTE classes, not just electrical,” said Clark. “Knowledge is power for the students. I encourage each and every student to have a well-rounded skill set to help increase their level of employ-ability.”