Halloween Kills: A Failure of the Haddonfield Horror Series 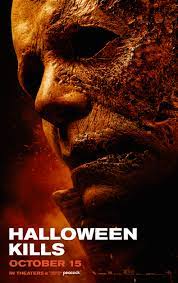 Halloween Kills was released on October 15.

“Halloween Kills” shines a light on how “fear spreads virally,” according to director David Gordon Green. The film is an addition to the Michael Myers universe. In “Halloween Kills,” Michael has escaped Laurie’s fire trap and comes to terrorize the residents of Haddonfield once again. After attacking Laurie, Michael continues his reign of terror with a killing spree. The residents of Haddonfield come together and attempt to rise up against Michael and finally kill him, but they inevitably fail.
From pushing Laurie to the side, to the boneheaded characters, I was thoroughly disappointed with this film. “Halloween Kills” was a tacky add on to the film series that didn’t do much for the overall storyline.
Many characters were reintroduced in the movie. Tommy Doyle, Lindsey Wallace, Marrion Chambers and Lonnie Elam got together in a bar to celebrate their survival of Michael’s attacks. This dim-witted celebration set them up to be attacked by Michael, who was waiting for them outside of the bar.
Cheesy set ups are a common theme throughout the film series, but I think “Halloween Kills” was worse than the rest of the series. Anyone who has ever seen a horror film would deal with Michael better than most of the numbskull characters in the movie. The entire plot depended solely on every character acting like a fool for the duration of the film.
As the residents of Haddonfield rose together to fight Michael, they went after the wrong person. The residents tormented a mentally ill elderly man to the point of suicide, because they thought he was Michael. Meanwhile, Michael was on his way through the town of Haddonfield killing children and adults alike.
Nearly all of Michael’s victims in the film were completely brainless, which inevitably led to their deaths. A couple in the film knew that Michael was on the loose, and when they suspected a home break in they decided to go after the invader with a paring knife instead of running away to safety. This foolish behavior allowed them to become Michael’s victims.
Compared to the rest of the film series, I think that “Halloween Kills” was a big failure. The movie had an unsatisfying plot and simpleminded characters, which ultimately led to a mediocre film. If you’re looking to laugh at the mindless characters, “Halloween Kills” might be the right movie for you. But if you’re looking for a scare, I would say that this film will only disappoint. The movie is available to stream on Peacock, but I think that this film is not worth your time or money to see in theaters