Girls basketball commences with practices, conditioning and activities to involve both the junior varsity and varsity teams in season traditions 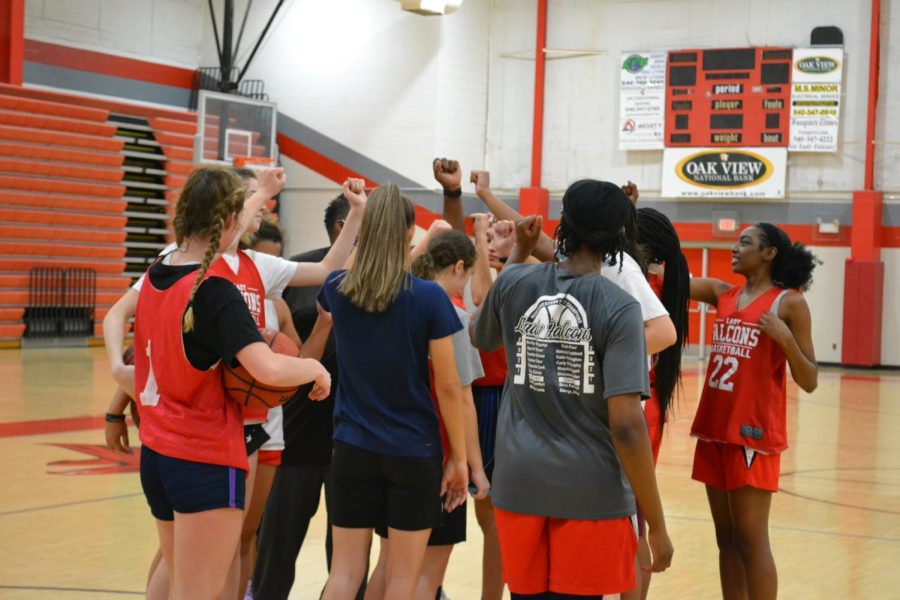 The varsity girls huddle up during practice to get hype before the next workout set.

The Lady Falcons are aiming high this season, with their ambitions being reinforced through their rigorous pre-season routine. They have been practicing three times a week for the past two months and will continue their rigor as the season commences.

“[Preseason is a] great opportunity for the new players to learn and really digest things and just get ready for the real season. We improve every time we’re in the gym,” says captains and senior Makayla Foddrell.

With last year’s district championship win, the team expects a difficult, but even more successful season.

“It’s going to be challenging because we have a target on our backs,” said Foddrell.

She noted that the dilemma of finding an effectively potent replacement for last season’s point guard will be one of the problems the team will face.

“We will have a bit of a challenge since we don’t have a true point guard right now. We have some people in the making. We just have to stay focused and keep working,” said Foddrell.

This year brings with it many new faces for the team and they want to capitalize on the preseason to develop the chemistry that every team needs.

“We’re trying to build chemistry now so once the season starts everything is easy to go right into. We have a lot of young kids and we’re trying to get them to feel everything out,” said Foddrell.

This year will see another highly anticipated match against Millbrook.

The team seems excited for the season to begin and to take another shot at the championship.

“It’s really been a journey, we went from not winning anything to winning district championships which is awesome, and that’s definitely the goal this year, to go even further,” said Foddrell.