A new label: breaking down ‘Basic’ 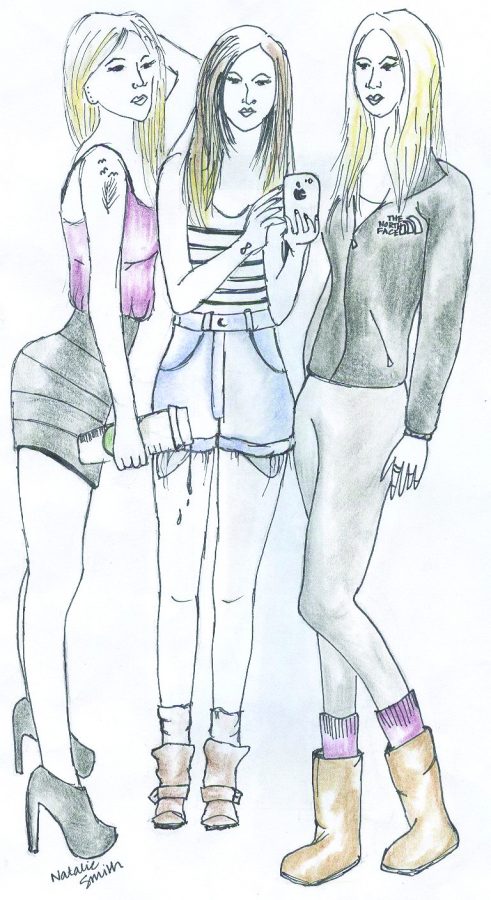 From the jocks to the punks, high schoolers always love to label their peers. In the last few months, however, a new label has arisen amongst teenagers: basic.
“Being basic refers to a girl who conforms to current trends,” senior Mackenzie Rollins said. “Guys can be basic, but when I think of basic, I definitely think of teenage girls.”
The use of basic as an adjective can be traced back to a rap by comedian Lil’ Duval, who uses the term to describe a woman who puts herself above others because of her arrogant attitude and material wealth. The song quickly became a hit in the underground rap community, and soon enough, the term emerged on social media web sites. Among high-schoolers, the term describes a certain breed of teenage girl.
“My definition of basic would be a young girl who is easily driven by society and can be corrupted with the slightest movements,” junior Sabrina Gaytan said. “She craves attention at any given moment and wants the entire world to lay eyes on her. The most well-known term for basic at any regular high school is the girl who wears an upscale North Face sweater and the appropriate yoga pants, and frequently visits Starbucks Coffee.”
Gaytan says that the term basic is less of a tag for an individual clique and more of an adjective that describes a widespread community of teenage girls.
“Basic can be found in singular form, but also in plural form,” Gaytan said. “I’ve noticed that young females associate together and after school hours, making it plural. Nevertheless, a young female can be found in her room taking a selfie, applying a filter to it, and posting it on Instagram with the hopes of capturing the attention of other Instagram users.”
Social media has had an influence in defining what most teenagers consider basic.
“What you tweet and the pictures you post on Instagram definitely influence if people call you basic,” freshman Lauren Canard said. “A picture of a Starbucks cup with the hashtag ‘love’ is pretty basic, because everyone does it. Girls who tweet inspirational quotes or complain about their lives on Twitter are basic, and it’s annoying. Get a blog.”
While adding filters to iPhone photos of lattes and using Twitter as a diary are considered basic, a large part of the label comes from what a girl wears.
“When I think of a basic girl, I definitely think about Ugg boots, leggings, and sweaters,” Canard said. “They shop at name-brand stores, like American Eagle, but basic girls also go thrift shopping.”
According to senior Makayla Marshall, basic girls are particularly visible in the winter months.
“October through February is when girls break out their North Face jackets and have a Starbucks in hand,” Marshall said. “In the summer, they wear Hollister booty shorts, high-waisted shorts, sandals, crop tops, and lots of friendship bracelets and anklets.”
According to senior Brad Curtis, girls aren’t the only ones who dress basic.
“Guys can definitely be basic, like when they wear khakis and Sperry boat shoes. Lanyards also make a guy basic,” Curtis said. “Sometimes I dress basic, like when I wear colored shorts with button down shirts. I guess a lot of it is the physical aesthetics of what you wear.”
While the adjective basic has become popular in the last few months, Rollins believes that basic girls roamed the halls long before the term was coined.
“There have always been basic girls,” Rollins said. “The trends like Starbucks and North Face jackets are the current trends of basic girls, but at different times, it could be different trends.”
According to Rollins, mainstream culture shapes basic girls.
“I think the current trends come from an influence of things some girls do, like listen to Taylor Swift and watch Gossip Girl,” Rollins said. “You’re conforming to the ditzy and plain stereotype of a teenage girl. ”
Following popular styles and trends, such as the “hipster” look sold by retailers Urban Outfitters, Forever 21, and Free People, can make a girl basic.
“Anyone basic is unoriginal,” Marshall said. “No one wants to admit to being basic. If you get Chick-Fil-A before school and wear boots in the fall, you’re basic. Just about every girl does that, yet they think they are the exception.”
Senior Caroline Sutton says that the negative connotation is undeserved, because the majority of apparel and aesthetics enjoyed by basic girls are popular with most teenagers.
“I don’t think the term basic is offensive,” Sutton said. “I have basic qualities; I think everyone has basic qualities, but you become ‘basic’ when you exaggerate your basic qualities to come off as more basic than you are.”