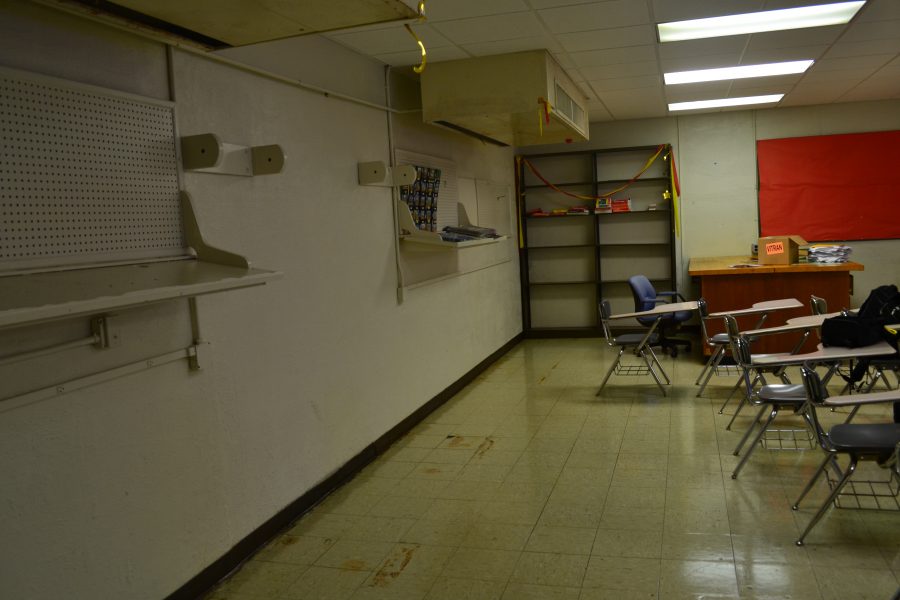 There is a certain notoriety associated with the annex. Although the building was new in 1970s, the annex is now somewhat akin to an ancient crypt—a dark, windowless labyrinth that students loathe traveling to, musty and mysteriously damp.

“In [Spanish teacher Cecilia] Dohm’s old room, there was this weird, red sticky substance on the walls,” Wilmore said. “And then we couldn’t stay in the room due to our substitute teacher’s allergy to the mold and had to relocate to the woodshop. It’s super distracting, and the fact that the whole annex is this disgusting really bothers me.”

Students and faculty aren’t the only life forms prowling the halls of the annex. Whispers of giant cockroaches on the walls and mice crawling in crevices are commonplace.

“One time in biology, we were looking for bugs outside, but we could hardly find any,” junior Jacqueline Smith said. “So we went searching through the annex instead. Problem solved. Also, there was this issue with ants crawling through a crack near the door of my Spanish class.”

“The air conditioning makes way too much noise, and it’s very dirty,” Spanish teacher Archer Gilliam said. “It gives me a headache, and it makes it impossible to listen to students when they’re trying to speak. There’s a lot of moisture in the room, and posters would have trouble staying on the walls. I had to hot glue them.”

Nutrition teacher Christine Stanton believes the main problem with the annex is its dreary appearance.

“The walls are dirty, the floors are cracked, and you’re so far removed from everything—kids are constantly late,” Stanton said. “It needs a facelift.”
Assistant Principal James Raines acknowledges that the annex needs a cosmetic update.

“We could use a new paint job for sure, and some ceiling tiles need to be replaced,” Raines said. “But in general condition, [the annex] is good. We put in work on it when the funds are there.”

The annex hosts the majority of trade and technical classes which will not be moving to the new building. Sophomore Mackenzie McDaniel-Neff said that while the environment of the annex has not adversely affected the experience in graphic imaging, a new room would be an improvement.

“There were a bunch of ants in [graphic design teacher Jamell] Newman’s room last year, and the lighting is pretty annoying,” McDaniel-Neff said. “Being in the new building would be better overall, since apparently the computers in Mr. Newman’s room have been acting up and people have been losing data.”

A main complaint students hold of the annex are the bathrooms; with only one set of restrooms, students often have to take their business elsewhere.

“The bathroom is very inspirational. There are quotes and graffiti everywhere; it’s very Dr. Phil in there,” junior Alondra Arellano said. “But honestly, they hardly count as bathrooms. They’re constantly breaking down, and you have to travel to the new building to get to the closest one.”

A newly renovated building for business and foreign language classes will open Dec.18, while the path to the upper annex will be cleared by mid-October. According to Principal Clarence Burton, which teachers will be moving to the new building and what the fate of their old annex classrooms will be is currently under discussion.

“We’re still talking about it,” Burton said. “We haven’t decided.We may move some classes from the lower annex to the upper annex because of the better lighting and windows.”

Gilliam hopes for updated utilities in the new building.

The campus courtyard is now available for student use. Ultimately, it will be maintained by the school’s custodial staff, but at the moment, it’s under the supervision of White and Turner Construction, causing a proliferation of weeds. Furthermore, a new fence will soon surround the area of the school.

However, according to Burton, no renovations to the annex are currently under consideration. This isn’t a problem for some students who find merits within the old building.