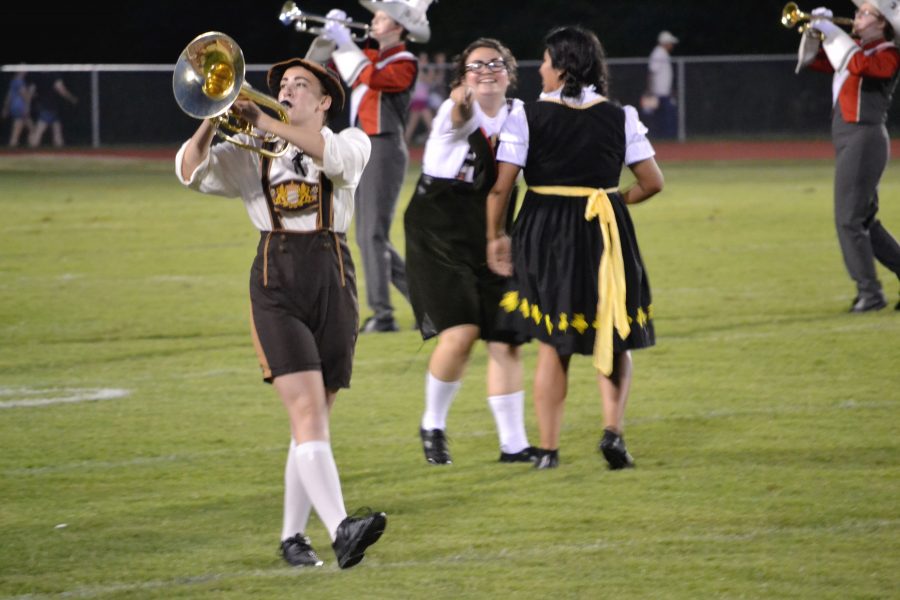 Senior Kelly Shaw is the drum major of the marching band; she not only conducts the band, she leads the entire show.
“For me, it’s a whole new ball game,” Shaw said. “Last year I was the junior drum major in the back conducting. Now, I’m in the front conducting. It’s a step up. We have captains and lieutenants. For me it’s interesting to be the one in charge and have everyone look up to you.”
Shaw’s passion for music began six years ago and has led to her leadership role today.
“I first got introduced to it back in the sixth grade. My brother was doing marching band, and he told me about how fun it was,” Shaw said. “I started playing flute in the sixth grade, and I still play it to this day.”
The marching band begins practice with stretching, and then breaks up into sections based on their instruments or into basics block, where they practice the fundamentals of marching. Members warm up musically and then begin practicing for the drill, or show. Dot books lay out where each student is supposed to stand and how the show is set up.
“The most challenging part for me is having to be strict with the band,” Shaw said. “I don’t like to be angry with them, but at the same time I’m strict because I have to be. They know whenever I’m serious, they have to be.”
Junior Austin Evans is junior drum major and hopes to be the leader, next year.
“This year I’m learning the ropes of drum major so next year I can lead the band,” Evans said. “It takes a lot of talent to stay focused. Kelly can pick up places and know exactly where it is; that takes me awhile. I envy her.”
Marching band students attend band camp in West Virginia before school starts where they meet the incoming freshmen and get acclimated with the show they will be performing.
“It’s always interesting to get to know the freshmen. You never know what to expect,” Shaw said. “We say we’re a family. We all know each other and encourage each other. I love that. It’s a sport that needs everyone else to complete it.”
In 2009 the marching band won group A competition, which enabled them to be an open, or competitive, band, and they have stayed an open band ever since. The marching band has five competitions a year. The fourth competition is states, held in Virginia Beach, and the fifth is nationals held in the MET Life Stadium in New Jersey. FHS’s marching band gets invited to nationals each year. Competitions are judged on a scale of 0 to 100; this year the marching band hopes to break 90.
“You have to be invited to nationals,” Shaw said. “Last year we scored in the 80s, and we did really well, so they invited us back.”
This year the marching band is putting on a production based on Hansel and Gretal, in which Shaw plays the old lady who narrates the story. The first competition will be Sept. 27 at Herndon High School. Marching band productions involve many people in addtion to the musicians. They have a composer, the color guard, a pit crew, and people who make their props.
“The props are mostly done by parents. Band moms and dads make the world go round,” Shaw said. “They do everything. They make us meals and do our hair-things like that.”
Shaw believes the best part about being a part of the team is the friendships she’s made.
“I’ve made so many friends, and it’s made high school so much easier,” Shaw said. “I remember freshman year. I was lost, and I ended up finding a band kid who showed me where to go and took me to my class. I’m friends with everyone in band. We all know each other.”
~SaraRose Martin, co-editor-in-chief