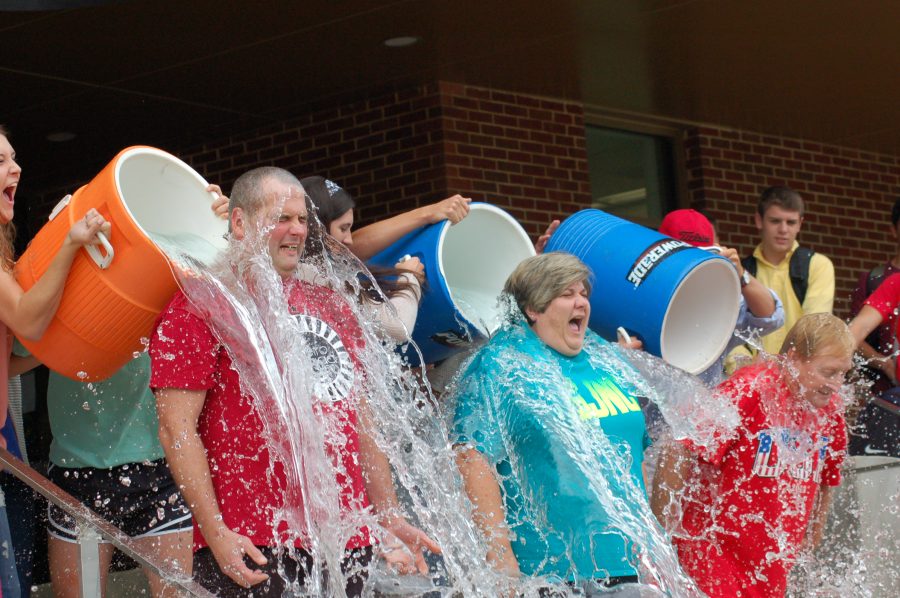 The ALS ice bucket challenge has been sweeping the nation for over a month. The idea is to dump a bucket of freezing ice water over one’s head and then nominate or challenge friends, family, or co-workers to do the same. After the new group is nominated, they have 24 hours to either complete the challenge or donate $100 to the Amyotrophic Lateral Sclerosis (ALS) Association.
The trend started when golfer Charles Kennedy, whose cousin suffers from ALS, completed the challenge and decided the money raised should go towards fighting ALS. The challenge spread by social media before it came to former Boston College baseball star Pete Frates who was diagnosed with ALS at the age of 27 in March, 2012. Frates called out multiple celebrities, including Tom Brady, and other Boston athletes. The challenge then went viral. LeBron James, Kevin Hart, and Tom Cruise all participated and chipped in. The fad swept the nation on Instagram, Facebook, Twitter, and Vine. But that’s exactly what it is, a fad. And that’s the problem.
Kony 2012
The video Kony 2012, produced by Invisible Children, was released in March, 2012. War criminal Joseph Kony became infamous due to his abduction of children to become sex slaves and soldiers. The video received nearly 100 million views and over one million “likes” on YouTube. But as the views began to rise, the focus started to shift from Kony to Invisible Children, especially after Invisible Children co-founder, Jason Russell, was seen naked outside his home in San Diego, California, spewing f-bombs and raging about the iPhone. By April, 2012, the movement to capture Kony had waned significantly. Invisible Children attempted to mend critics’ hearts by releasing a second video with a clearer objective, but the damage was done. The momentum that Invisible Children once had disappeared, while Kony still roams in Uganda with the Lord’s Resistance Army and tens of thousands of captured children.
Bring Back Our Girls
On April 15, 2014, a convoy of terrorists rolled into a small town in northern Nigeria and abducted nearly 300 high school girls age 15 to 18. The terrorist group, Boko Haram, opposes western education, as well as the education of women, and abducted the girls as punishment. People began to use the phrase “Bring Back Our Girls” on social media sites like Facebook and Twitter. Even the first lady Michelle Obama participated by posting a famous picture with the phrase written on a piece of paper. The United States sent troops to Nigeria and used surveillance planes to look for the women. But after a few short weeks, the powerful phrase fell out of use. What seemed like great activism turned to apathy. The world became indifferent and over 200 women are still missing.
ALS Ice Bucket Challenge
The ice bucket challenge is the current trend that narcissistic social media participants are using for likes, favorites, and retweets. The majority of participants aren’t even aware of what ALS is, also known as Lou Gehrig’s Disease. The disease affects cells of the brain and spin, slowly decreasing a patient’s ability to use his or her muscles. Soon after diagnosis, the patient has trouble walking, and as the atrophy progresses, victims begin having trouble speaking or eating. The disease is not curable, and respiratory failure eventually occurs. While it lasts, the Ice Bucket Challenge is undoubtedly a great thing for ALS. It’s clean, it’s fun, and it has raised awareness significantly. The donations have grown to over 15 million. Just like previous trends, however, the participants are often slacktivists who complete their “obligations” to receive a feel-good experience about this social cause without actually making much difference. The ice bucket challenge will fade, but the serious illness that is ALS will remain.