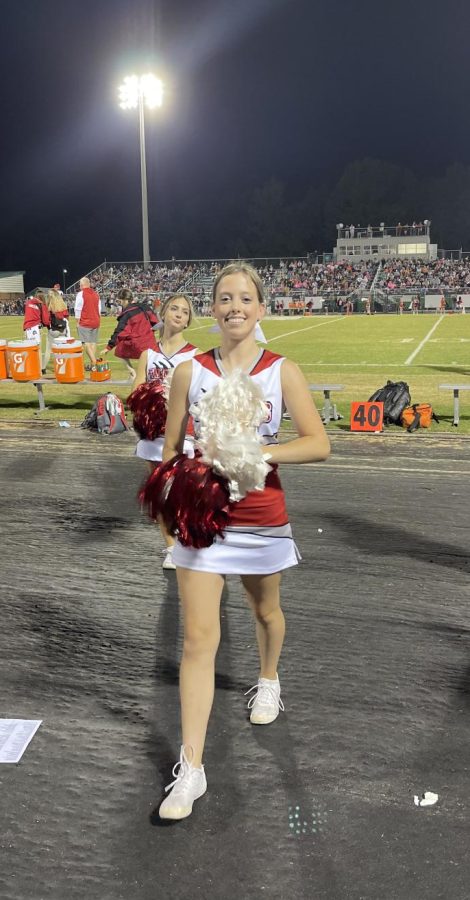 Izzy cheers for the Falcons during a football game this past fall season.

Q: When did you start cheering?
A: I started my freshman year.

Q: What got you into being a cheerleader?
A: Mostly my mom because we moved at the end of my eighth grade year from Michigan, and when we came here I was very new. I didn’t have a lot of friends because I hadn’t lived here long. When we moved here and my mom knew I liked gymnastics and stuff, and I didn’t really fit in at any other sports, my mom got me into cheerleading and I really enjoyed it.

Q: What is your favorite part about cheer?
A: On the bus riding to our meets, because we play music, and we have a lot of team bonding and stuff, especially the really long ones, and it’s a great time to get to know each other outside of cheer.

Q: What are your main goals for cheerleading?
A: I like to use the knowledge that I’ve gained throughout the past three years and really try to use it
to impact my experience as a cheerleader this year, mostly as a captain, because I really like being in
that leadership role, so I can show what I’ve learned, and just influence the younger girls on the team.

Q: Within cheerleading who is your biggest role model?
A: I would probably say my Grandma or my Mom, who was also a cheerleader, but mostly my Grand-
ma because she supports me. She’ll give me these really sweet messages that get me through my day, and if I ever feel stressed out I go to her, and she gives me all the motivation I need.

“It’s amazing to see how much she has blossomed from the shy, quiet girl to an amazing performer
who pulls your attention. She works hard and has grown so much in her eight cheer seasons,” said
head coach D.J. Christian. 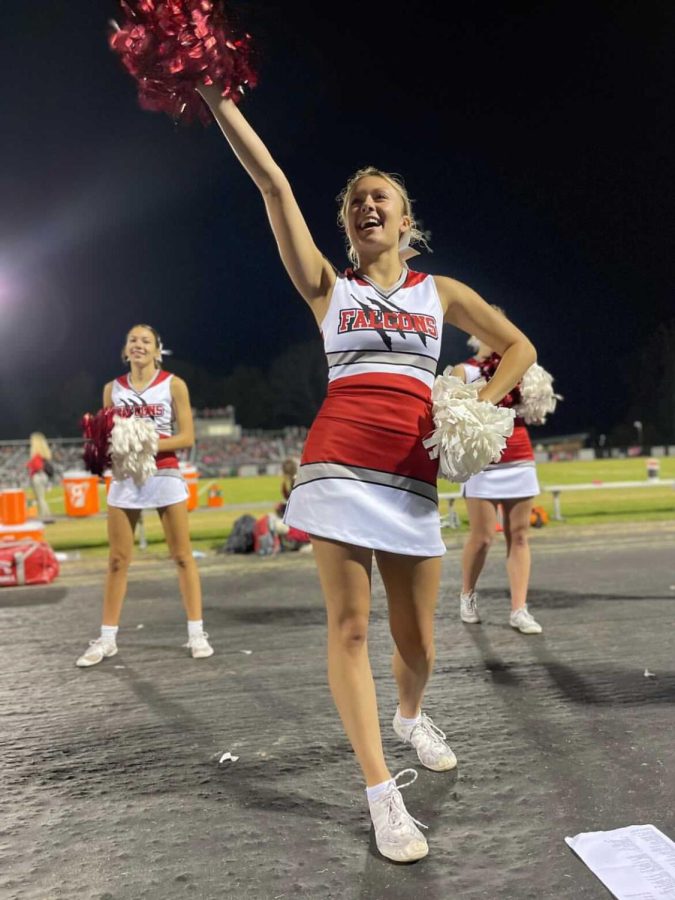 Ellie cheers on the Falcons at a football during this past fall season.

Q: How long have you been cheering?
A: I began at the end of my freshman year, so since sophomore year.

Q: How did you get involved in the sport?
A: I just had a lot of friends that had always done cheer, and I’ve always been flexible, so they just suggested that I join cheer.

Q: What is your favorite part about cheer?
A: Being in the gym every day, even though it’s exhausting. Sometimes we all get so much closer because it’s six days a week and three hours a day. Monday through Friday. Then sometimes because of football games, we will have a short practice before or after, but then on Saturday mornings we have practice or competitions.

Q: Are you planning on cheering after high school?
A: I was, but I sprained my back at the beginning of the season and after that the season was super
hard for me, so I decided not to.

Q: What do you hope to achieve with cheer?
A: Honestly this season I just wanted to go to regionals and hopefully states.

Q: Who is your biggest role model within the sport?
A: Probably Kate Lattig, she graduated last year…She had great jumps. She was good at dancing, tumbling, stunting, everything. She was also super supportive and she helped me be more confident.

Bunch has “thrived as a cheerleader on both the varsity sideline and varsity competition teams…She
has improved every single one of her skills, moving quickly to the forefront,” said head coach D.J.
Christian.